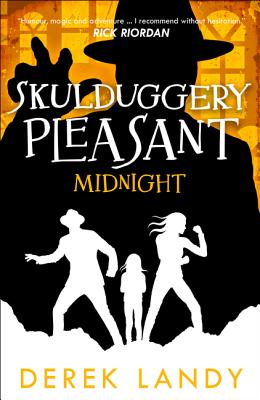 This is book number 11 in the Skulduggery Pleasant series.

Skulduggery Pleasant and Valkyrie Cain are back in their most gripping story yet, as book 11, Midnight, picks up where Resurrection left off - and runs.

For years, Valkyrie Cain has struggled to keep her loved ones safe from harm, plunging into battle - time and time again - by Skulduggery Pleasant's side, and always emerging triumphant.

But now the very thing that Valkyrie fights for is in danger, as a ruthless killer snatches her little sister in order to lure Valkyrie into a final confrontation. With Skulduggery racing to catch up and young sorcerer Omen scrambling along behind, Valkyrie only has twelve hours to find Alice before it's too late. The clock is ticking...

Derek Landy lives near Dublin. Before writing his children's story about a sharply-dressed skeleton detective, he wrote the screenplays for a zombie movie and a murderous horror film. "I think my career-guidance teacher is spinning in her grave," he says, "or she would be if she were dead."