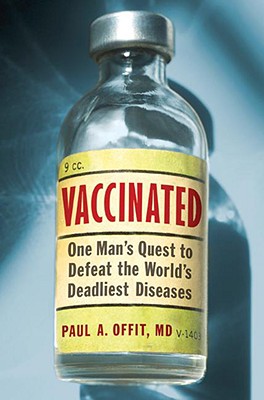 Vaccines save millions of lives every year, and one man, Maurice Hilleman, was responsible for nine of the big fourteen. Paul Offit recounts his story and the story of vaccines

Maurice Hilleman discovered nine vaccines that practically every child gets, rendering formerly dread diseases—including often devastating ones such as mumps and rubella—practically forgotten. Paul A. Offit, a vaccine researcher himself, befriended Hilleman and, during the great man’s last months, interviewed him extensively about his life and career.

Offit makes an eloquent and compelling case for Hilleman’s importance, arguing that, like Jonas Salk, his name should be known to everyone. But Vaccinated is also enriched and enlivened by a look at vaccines in the context of modern medical science and history, ranging across the globe and throughout time to take in a fascinating cast of hundreds, providing a vital contribution to the continuing debate over the value of vaccines.

Paul A. Offit, MD, is a professor of pediatrics in the Division of Infectious Diseases and director of the Vaccine Education Center at the Children's Hospital of Philadelphia, as well as the acclaimed author of Autism's False Prophets, Vaccinated, Pandora's Lab, and Deadly Choices.

"Medical writing at its finest."
— David Oshinsky, author of Polio and winner of the Pulitzer Prize for History

"An enlightening glimpse into the complex interface between public health and private industry, chronicling the ability of a singularly tenacious person to save more lives than perhaps any other scientist in history."
— New England Journal of Medicine

"Offit gives the reader a window into the key scientific advances that have led to the modern age of vaccines. . . . [It] is a compelling story. . . . Offit brings interesting perspective to the characters of the time."
— Journal of the American Medical Association