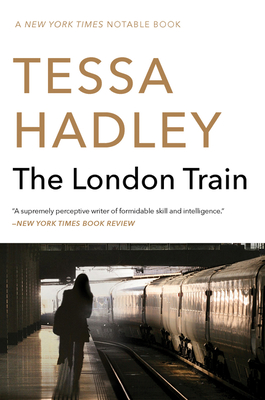 In this New York Times Notable Book from one of today’s most acclaimed writers, two lives stretched between two cities converge in a chance meeting that will irrevocably change their lives.

“Hadley is a supremely perceptive writer of formidable skill and intelligence, someone who goes well beyond surfaces.”—New York Times Book Review

Unsettled by the recent death of his mother, Paul sets out in search of Pia, his daughter from his first marriage, who has disappeared into the labyrinth of London. Discovering her pregnant and living illegally in a run-down council flat with a pair of Polish siblings, Paul is entranced by Pia’s excitement at living on the edge. Abandoning his second wife and their children in Wales, he joins her to begin a new life in the heart of London.

Cora, meanwhile, is running in the opposite direction, back to Cardiff, to the house she has inherited from her parents. She is escaping her marriage, and the constrictions and disappointments of her life in London. But there is a deeper reason why she cannot stay with her decent Civil Service husband; the aftershocks of which she hasn’t fully come to terms with herself.

Connecting both stories is the London train, and a chance meeting that will have immediate and far-reaching consequences for both Paul and Cora.

Tessa Hadley is the author of six highly acclaimed novels, including Clever Girl and The Past, as well as three short story collections, most recently Bad Dreams and Other Stories, which won the Edge Hill Short Story Prize. Her stories appear regularly in The New Yorker; in 2016 she was awarded the Windham Campbell Prize and the Hawthornden Prize. She lives in London.

“Powerful…. Ms. Hadley has a talent for the canny detail…. There are platoons of novelists producing work about middle-class marriages in disarray, most of it very dull. Ms. Hadley is one of the gifted exceptions, and the calm acuity with which she depicts these fractured relationships is haunting.” — Wall Street Journal

“Brings a quiet, nuanced intelligence to domestic fiction…. The London Train recasts these familial preoccupations in an intriguing, sophisticated structure…. Hadley, a meticulous stylist, has woven into her narrative reflections on memory and time.”

“[Hadley] is a writer who has always allowed her fiction space to breathe beyond its narrative borders. . . . Shows how language, deployed with precision or daring, can make thrillingly new the textures and undercurrents of everyday life.” — Peter Parker, Sunday Times (London)

“Hadley is a close observer of her characters’ inner worlds. Her language can be fine-grained, subtle, eloquent…. Hadley is a supremely perceptive writer of formidable skill and intelligence, someone who goes well beyond surfaces.” — Jean Thompson, New York Times Book Review

“Hadley’s strength lies in her characterization. . . . . There’s something pleasingly human about them. With characters like these Hadley makes us wonder what forms our own darkness takes.” — Richard Platt, TimeOut (London)

“Spectacular….A compelling and serious page-turner.” — Anna Shapiro, The Observer (London) on Accidents in the Home

“Tessa Hadley is a writer whose antennae are almost indecently attuned to the interior static of private lives....[M]asterly...” — Emma Hagestadt, The Independent

“The minds of Paul and Cora are so fully occupied by this most astute and sympathetic of writers....Hadley has crafted real excitement, so that each story ends in a flurry of curiosity and The London Train snaps shut with an effective twist.” — Susanna Rustin, The Guardian