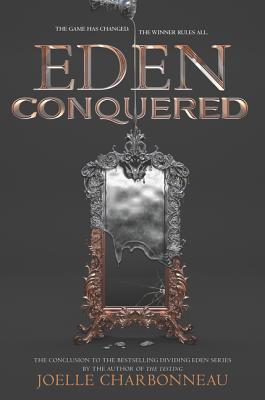 The electrifying conclusion to the Dividing Eden series by the New York Times bestselling author of the Testing trilogy, Joelle Charbonneau.

The Trials of Virtuous Succession have ended. Prince Andreus is king—and Princess Carys is dead.

But even as he’s haunted by what he did to win the throne, Andreus discovers that his dream of ruling only brings new problems. The people love his twin even more in death than they did when she was alive. The Elders treat him as a figurehead. And worst of all, the winds of Eden are faltering.

But despite what everyone believes, Carys is alive. Exiled to the wilderness, Carys struggles to control the powers that have broken free inside her. And as she grows stronger, so does her conviction that she must return to the Palace of Winds, face her twin and root out the treachery that began long before the first Trials started.

The Kingdom of Eden is growing darker with each passing day. Brother and sister, former foes, must decide whether some betrayals cut too deep to be forgiven—and whether one will wear the crown or both will lose everything.

Joelle Charbonneau has performed in opera and musical-theater productions across Chicagoland. She is the author of the New York Times and USA Today bestselling Testing trilogy and the bestselling Dividing Eden series, as well as two adult mystery series and several other books for young adult readers. Her YA books have appeared on the Indie Next List, YALSA’s Top Ten Quick Picks for Reluctant Young Adult Readers, and state reading lists across the country. Joelle lives in the Chicago area with her husband and son. www.joellecharbonneau.com

PRAISE FOR DIVIDING EDEN: “Charbonneau’s skill as a thriller writer will hook readers as the tension between the siblings grows and the Trial of Succession rushes towards an explosive end... This new fantasy will give them plenty to sink their teeth into.”
— Booklist

“The trendy plot—filled with royal intrigue, romance, and a dangerous competition—is sure to make this new fantasy series a popular choice... Hand this one to fans of Sarah J. Maas, Kiera Cass, and Evelyn Skye.”
— School Library Journal

“The siblings are complex characters, weighted down by their respective heartaches and issues, and their skeptical views on the world feel realistic... there’s a lot to like about this messed up, lush, and dark world.”
— Bulletin of the Center for Children’s Books