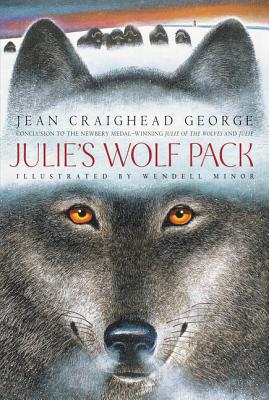 The acclaimed final book in the trilogy that begins with the Newbery Medal-winning Julie of the Wolves.

In this thrilling adventure about the wolf pack that saved the life of a young girl when she was lost on the tundra, Julie has returned to her family, but her wolf pack has a story all its own.

Fearless but inexperienced Kapu is now the new leader of the pack. He must protect his wolves from the threats of famine and disease and, at the same time, defend himself from bitter rivals, both inside and outside the pack, who are waiting for their chance to overthrow him. The strength of Kapu's leadership will determine not just the well-being of the pack but its very survival.

Jean Craighead George's research and first-hand observation form this engrossing epic tale that's sure to draw readers into the fascinating world of wolves.

Don't miss any of the books in Jean Craighead George's groundbreaking series: Julie of the Wolves, Julie, and Julie's Wolf Pack.

Jean Craighead George wrote over one hundred books for children and young adults. Her novel Julie of the Wolves won the Newbery Medal in 1973, and she received a 1960 Newbery Honor for My Side of the Mountain. Born into a family of famous naturalists, Jean spent her entire career writing books that celebrated the natural world.

“George continues to write, with astounding intimacy, about the wolves she introduced in the Newbery-winning Julie of the Wolves. There is death, pain, and sadness here, illness, human interference and disaster. But there is also a grandeur and dignity.”
— Publishers Weekly

“Drawing upon her knowledge of wolf behavior, Eskimo culture, and Alaska, George continues the story of Kapu, the splendid male pup Julie nursed back to life in Julie of the Wolves.”
— School Library Journal