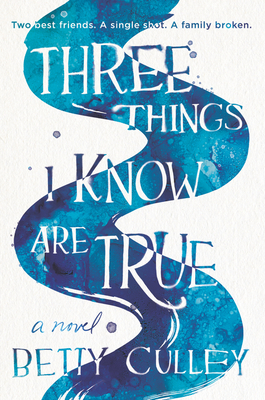 Fans of Jandy Nelson and Marieke Nijkamp will love this deeply moving novel in verse about the aftermath of a gun accident.

Life changes forever for Liv when her older brother, Jonah, accidentally shoots himself with his best friend Clay’s father’s gun. Now Jonah needs round-the-clock care just to stay alive, and Liv feels like she’s the only person who can see that her brother is still there inside his broken body.

With Liv’s mom suing Clay’s family, there are divisions in the community that Liv knows she’s not supposed to cross. But Clay is her friend, too, and she refuses to turn away from him—just like she refuses to give up on Jonah.

This powerful novel is a stunning exploration of tragedy, grief, compassion, and forgiveness.

Betty Culley lives in central Maine, where the rivers run through the small towns. She’s an RN who worked as an obstetrics nurse and as a pediatric home hospice nurse. She went into foster care at nine months old and was adopted three years later. As an adult, she was found by five siblings she never knew she had. Visit her online at www.bettyculley.com.

"Culley’s compelling free-verse poems accumulate into a poignant story of a family that was already struggling and then transformed into something unrecognizable. Liv’s narration is touching, honest, and perceptive. A story of love and resilience as much as loss and grief." — Bulletin of the Center for Children’s Books (starred review)

"An emotional journey that follows a life-altering tragedy. Culley weaves carefully chosen details into a slowly forming tapestry. A tale that is both harrowing in subject matter and elegant in execution." — ALA Booklist

"A heartbreaking story about a topic that is too prevalent in today’s society." — School Library Journal