A Collective Bargain: Unions, Organizing, and the Fight for Democracy (Hardcover) 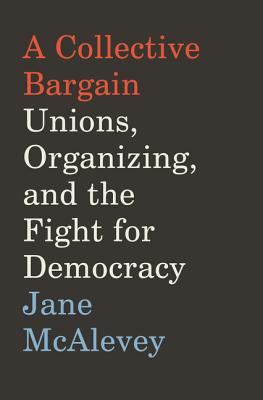 A Collective Bargain: Unions, Organizing, and the Fight for Democracy (Hardcover)

From longtime labor organizer Jane McAlevey, a vital call-to-arms in favor of unions, a key force capable of defending our democracy

For decades, racism, corporate greed, and a skewed political system have been eating away at the social and political fabric of the United States. Yet as McAlevey reminds us, there is one weapon whose effectiveness has been proven repeatedly throughout U.S. history: unions.

In A Collective Bargain, longtime labor organizer, environmental activist, and political campaigner Jane McAlevey makes the case that unions are a key institution capable of taking effective action against today’s super-rich corporate class. Since the 1930s, when unions flourished under New Deal protections, corporations have waged a stealthy and ruthless war against the labor movement. And they’ve been winning.

Until today. Because, as McAlevey shows, unions are making a comeback. Want to reverse the nation’s mounting wealth gap? Put an end to sexual harassment in the workplace? End racial disparities on the job? Negotiate climate justice? Bring back unions.

As McAlevey travels from Pennsylvania hospitals, where nurses are building a new kind of patient-centered unionism, to Silicon Valley, where tech workers have turned to old-fashioned collective action, to the battle being waged by America’s teachers, readers have a ringside seat at the struggles that will shape our country—and our future.

Jane McAlevey is an organizer, author, and scholar. She is currently a senior policy fellow at the University of California at Berkeley’s Labor Center, part of the Institute for Research on Labor and Employment. McAlevey is also the strikes correspondent at The Nation magazine, has a biweekly advice column on strategy at Jacobin magazine, and is a regular media commentator. She continues to work as an organizer on union campaigns, to lead contract negotiations, and to train and develop organizers. Her first book, Raising Expectations (and Raising Hell): My Decade Fighting for the Labor Movement, was named the “most valuable book of 2012” by The Nation. In 2015, she received her Ph.D. from the City University of New York, followed by two years as a postdoctoral fellow at Harvard Law School.
“An introduction to the world of unions and their enemies. . . . McAlevey’s writing is an attempt to circulate organizers’ skills, breathing life into the long-quiescent labor movement. . . . A Collective Bargain, like the rest of McAlevey’s work, is indispensable.” —Alex Press, Bookforum
— Alex Press, Bookforum

“Incisive, brilliant, combined with trenchant strategic analysis. If we had more organizers like Jane McAlevey, we’d be winning.”
— Van Jones, CNN host and author of Beyond the Messy Truth

“A half century ago, the Koch family targeted workers’ collective power with so-called right-to-work laws. Now they and their allies have expanded their agenda to shackling democracy writ large... McAlevey shows us how workplaces provided a laboratory for this audacious project of domination—and better still, she explains how following the strategies and tactics of savvy union organizers could help save America from an ever more ruthless right...This empowering book could not be more timely.”
— Nancy MacLean, author of Democracy in Chains: The Deep History of the Radical Right’s Stealth Plan for America

“Jane McAlevey has devoted her life to reigning the destructive power of concentrated wealth and she is consumed with one over-arching question: How do we win? In this essential book, she draws on decades of organizing experience to make an overwhelming case that the new face of working-class power is female and fiercely feminist. It’s past time to listen up.”
— Naomi Klein, author of This Changes Everything

“Jane McAlevey is a brilliant strategist, rousing organizer, and razor-sharp critic inside the labor movement. In this critical moment when labor is resurgent, McAlevey’s small &#8220d” democratic spirit, and her humane, and deeply informed reporting and analysis is needed more than ever.”
— Katrina vanden Heuval, Editorial Director & Publisher, The Nation

“Read this book! It’s full of effective strategies for overcoming voter suppression against even the stiffest odds. Jane McAlevey is the type of experienced organizer the current White House fears.”
— Benjamin Todd Jealous, Former National President and CEO of the NAACP