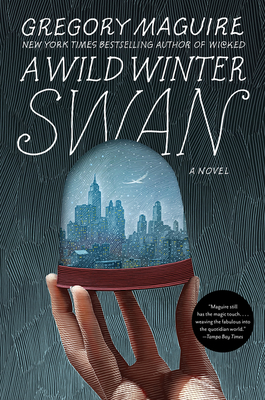 After brilliantly reimagining the worlds of Oz, Wonderland, Dickensian London, and the Nutcracker, the New York Times bestselling author of Wicked turns his unconventional genius to Hans Christian Andersen's "The Wild Swans," transforming this classic tale into an Italian-American girl's poignant coming-of-age story, set amid the magic of Christmas in 1960s New York.

Following her brother's death and her mother's emotional breakdown, Laura now lives on the Upper East Side of Manhattan, in a lonely townhouse she shares with her old-world, strict, often querulous grandparents. But the arrangement may be temporary. The quiet, awkward teenager has been getting into trouble at home and has been expelled from her high school for throwing a record album at a popular girl who bullied her. When Christmas is over and the new year begins, Laura may find herself at boarding school in Montreal.

Nearly unmoored from reality through her panic and submerged grief, Laura is startled when a handsome swan boy with only one wing lands on her roof. Hiding him from her ever-bickering grandparents, Laura tries to build the swan boy a wing so he can fly home. But the task is too difficult to accomplish herself. Little does Laura know that her struggle to find help for her new friend parallels that of her grandparents, who are desperate for a distant relative’s financial aid to save the family store.

As he explores themes of class, isolation, family, and the dangerous yearning to be saved by a power greater than ourselves, Gregory Maguire conjures a haunting, beautiful tale of magical realism that illuminates one young woman’s heartbreak and hope as she begins the inevitable journey to adulthood.

Gregory Maguire is the New York Times bestselling author of A Wild Winter Swan; Hiddensee; After Alice; Confessions of an Ugly Stepsister; Lost; Mirror Mirror; and the Wicked Years, a series that includes Wicked—the beloved classic that is the basis for the blockbuster Tony Award–winning Broadway musical of the same name—Son of a Witch, A Lion Among Men, and Out of Oz. Maguire has lectured on art, literature, and culture both at home and abroad. He lives with his family in New England.

“As Maguire has so often done before with books like Wicked and Mirror Mirror, A Wild Winter Swan is a delight of fantasy and the grotesquely beautiful in all of us.”
— San Francisco Book Review

“A comical, entertaining, heartfelt, and rare story, A Wild Winter Swan is the highbrow fairy tale your fall yearns for.”
— Shondaland

“Maguire, whose gift for transforming children’s stories is most famously on display in Wicked, works his magic once again with this retelling of Hans Christian Andersen’s fairy tale 'The Wild Swans.' An enchanting, tender, often funny coming-of-age story whose perceptive truths about the human condition surprise and delight.”
— Library Journal (starred review)

“This is a novel that is meant to be read in a book nook with thick socks and a winter sweater. It is a very comfortable read, where moments of stress and sadness bloom into scenes of real mystery and beauty . . . A Wild Winter Swan is unlike anything I have read in a long time--in its intimacy, simplicity and welcoming solace.”
— Bookreporter.com

“In a masterful meld of fantasy, longing, and troublesome relationships, Maguire’s A Wild Winter Swan shows us, and its young protagonist, that heartfelt connections with other people—and with animals—can lay for us a bridge between life’s sorrows and its wonder.”
— Historical Novel Society

“Gregory Maguire still has the magic touch . . . Maguire tells Laura’s story in lush prose, laced with humor and poignancy, weaving the fabulous into the quotidian world. It’s a spell you’ll be happy to have cast upon you.”
— Tampa Bay Times