The World Turned Upside Down: Radical Ideas During the English Revolution (Paperback) 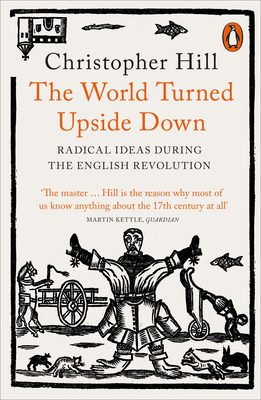 The World Turned Upside Down: Radical Ideas During the English Revolution (Paperback)


On Our Shelves Now
“Immensely rich and exciting . . . Christopher Hill has that supreme gift of being able to show us the seventeenth-century world from the inside.”—Arthur Marwick in New Society

Within the English revolution of the mid-seventeenth century which resulted in the triumph of the protestant ethic—the ideology of the propertied class—there threatened another, quite different, revolution. Its success “might have established communal property, a far wider democracy in political and legal institutions, might have disestablished the state church and rejected the protestant ethic.”
In The World Turned Upside Down Christopher Hill studies the beliefs of such radical groups as the Diggers, the Ranters, the Levellers, and others, and the social and emotional impulses that gave rise to them.

The relations between rich and poor classes, the part played by wandering “master-less” men, the outbursts of sexual freedom and deliberate blasphemy, the great imaginative creations of Milton and Bunyan—these and many other elements build up into a marvelously detailed and coherent portrait of this strange, sudden effusion of revolutionary beliefs. It is a portrait not of the bourgeois revolution that actually took place but of the impulse towards a far more fundamental overturning of society.

“Brilliant . . . he depicts with marvelous erudition and sympathy the profound rationality of the Cromwellian ‘underground.’”—David Caute in New Statesman

“Incorporates some of Dr. Hill’s most profound statements yet about the seventeenth-century revolution as a whole.”—Economist
Christopher Hill is the former Modern History Fellow and Tutor and Master of Balliol College, Oxford. His many award-winning books include The World Turned Upside Down and The English Bible and the 17th Century Revolution.