What Time Is It, Mr. Crocodile? (Paperback) 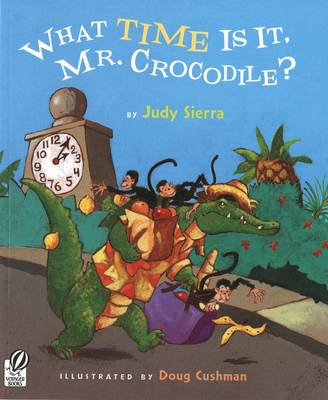 What Time Is It, Mr. Crocodile? (Paperback)


Usually Ships in 1-5 Days
Mr. Crocodile has big plans for finally catching--and eating--five pesky monkeys, but those little rascals dupe him again and again. By the time the clock strikes six, those mischievous monkeys actually teach Mr. Crocodile a thing or two about friendship . . . and about having fun!

Judy Sierra holds a Ph.D. in folklore from UCLA. She is the author of many esteemed children's books, including Nursery Tales Around the World, winner of the Aesop Prize from the American Folklore Society, and Good Night, Dinosaurs. She is also the reteller/compiler of several books of folklore for teachers and storytellers. Ms. Sierra lives in Northern California.

Doug Cushman is a veteran mystery writer for children and the illustrator of more than 100 picture books. Among his many popular books are the seven HOLIDAY MICE books, written by Bethany Roberts. He lives in Northern California and Paris.
"Cushman . . . captures the monkeys' energy . . . to make any time the right time for this irresistible rhyme."--Kirkus Reviews (starred review)