The Far Traveler: Voyages of a Viking Woman (Paperback) 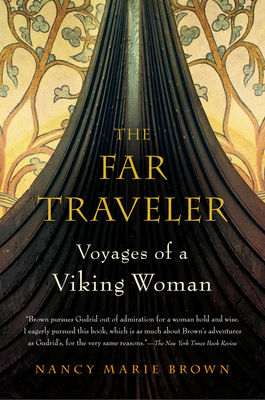 The Far Traveler: Voyages of a Viking Woman (Paperback)


Usually Ships in 1-5 Days
Five hundred years before Columbus, a Viking woman named Gudrid sailed off the edge of the known world. She landed in the New World and lived there for three years, giving birth to a baby before sailing home. Or so the Icelandic sagas say. Even after archaeologists found a Viking longhouse in Newfoundland, no one believed that the details of Gudrid’s story were true. Then, in 2001, a team of scientists discovered what may have been this pioneering woman’s last house, buried under a hay field in Iceland, just where the sagas suggested it could be.  Joining scientists experimenting with cutting-edge technology and the latest archaeological techniques, and tracing Gudrid’s steps on land and in the sagas, Nancy Marie Brown reconstructs a life that spanned—and expanded—the bounds of the then-known world. She also sheds new light on the society that gave rise to a woman even more extraordinary than legend has painted her and illuminates the reasons for its collapse.


NANCY MARIE BROWN is the author of A Good Horse Has No Color and Mendel in the Kitchen. She lives in Vermont with her husband, the writer Charles Fergus.
PRAISE FOR THE FAR TRAVELER "[A] snappily written biography . . . In surprising flashes, Gudrid comes into focus. Brown pursues Gudrid out of admiration for a woman bold and wise. I eagerly pursued this book, which is as much about Brown's adventures as Gudrid's, for the very same reasons."—The New York Times Book Reivew  "Brown's enthusiasm is infectious as she re-teaches us our history."—The Boston Globe