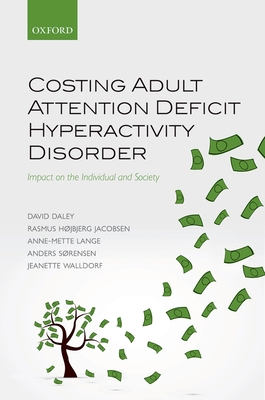 
Special Order
The rapid increase in recent years in the number of children and adults accessing care for ADHD (Attention Deficit Hyperactivity Disorder), raises a number of questions. It is unclear whether the increase is due to an increased public and professional recognition and awareness of ADHD as a
debilitating human condition or to an actual increase in the incidence of individuals suffering from ADHD. Depending on the reasons behind the increased burden on services, and whether more effective treatments can be found, the future costs to society could be enormous. The study presented in this
book estimates the private and social costs of ADHD. The key focus of this book is to study the costs related to individuals with ADHD who have not been diagnosed and who have not received treatment. In this respect, the study makes a unique contribution to scientific knowledge by investigating the cost of untreated ADHD. The study investigates the
extent to which individuals with undiagnosed ADHD in childhood fare differently compared to otherwise similar individuals without ADHD. A long list of important parameters in an individual's life, e.g. educational attainment, occupational status, income, family situation, criminal record, health is
examined. The results of the study provide not just cost estimates of ADHD; per se, but also create a point of reference which will be highly relevant for the evaluation of any future treatment for ADHD. The clear picture emerging from this study is that ADHD is associated with considerable private and social costs, reflecting that Adults with ADHD exhibit weak performance across all applied measures. These findings remain even when adults with ADHD are compared to a control group of their own
siblings Even though the study is performed for Denmark it is argued that generalizability of the established results beyond Denmark is valid.

David Daley, Professor of Psychological Intervention and Behaviour Change, School of Medicine, Institute of Mental Health, University of Nottingham, Rasmus Hojbjerg Jacobsen, Senior Advisor, Centre for Economic and Business Research, Copenhagen Business School, Anne-Mette Lange, Clinical psychologist, Research Department, Center for Child & Adolescent Psychiatry, Aarhus University Hospital, Anders Sorensen, Professor, Department of Economics, Copenhagen Business School, Jeanette Walldorf, Research Assistant, The World Bank David Daley holds a B.A in Applied Psychology from the National University of Ireland, University College Cork and a PhD in Child Psychopathology from the University of Southampton. He is co-director of the Centre for ADHD and Neurodevelopmental Disorders Across the Lifespan at the Institute ofMental Health at the University of Nottingham and co-director of the international centre for mental health in China. His research interests are focused on non-shared environmental influences on Attention Deficit Hyperactivity Disorder, in particular he has devoted much of his career to the study offactors that enhance and interfere with the effective and enjoyable parenting of children with ADHD. Rasmus Hojbjerg Jacobsen holds a PhD in economics from the University of Aarhus. He is a Senior Advisor at the Centre for Economic and Business Research at Copenhagen Business School. His main research interests are the costs to society of health issues and cost-benefit analyses of social efforts.In addition to this he has also worked as a consultant for the Danish government and for Danish NGOs on a number of projects relating to cost-of-illness and cost-benefit-analysis. Anne-Mette Lange qualified as a clinical psychologist at University College London, and worked in South London CAMHS for six years before returning to Denmark. She is based at the Center for C&A Psychiatry at Aarhus University Hospital, developing clinical and research initiatives for children withmental health problems and their families. Anne-Mette Lange is the principle investigator on the first large, randomised controlled trial in Denmark of psychosocial interventions in the treatment of ADHD in young children in a clinical setting at three sites in Danish CAMHS. She acts as professionaladvisor to a number of Danish agencies and foundations. Her expertise and focus is upon ADHD and evidence-based psychological interventions for child- and adolescent mental health problems in general, and models of dissemination and implementation. Anders Sorensen holds an MSc degree in economics from Aarhus University and a PhD from Copenhagen Business School (CBS). He is Professor of Empirical Economics at the Department of Economics, CBS, and co-director of CBS' Human Capital, Organization design, and performance (HOPE) researchenvironment. Previously, he was Assistant Professor at Johns Hopkins University. He was independent member of the Productivity Commission of the Danish Government (2012-2014). His main research interest is in productivity, human capital, and innovation as well as empirical economics. Sorensen haspublished his research in journals such as American Economic Review, Journal of Economic Growth, and Small Business Economics. Jeanette Walldorf works for the Development Research Group at the World Bank. Previously, she worked at Centre for Economic and Business Research, CBS. Her technical skills include a range of topics in micro-econometrics. She has experience working with administrative data as well as household, community, and facility level surveys, conducting data cleaning, quality checks, and statistical and econometric analysis. Her research focus is on health related topics in developed and developing countries. She has a MS degree in Mathematics and Economics from the University of Copenhagen.