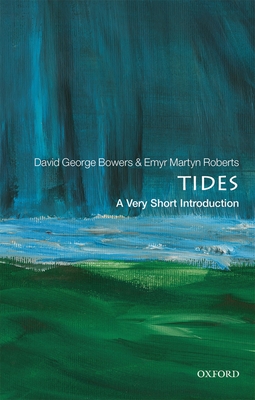 
Usually Ships in 1-5 Days
The tide is the greatest synchronised movement of matter on our planet. Every drop of seawater takes part in tidal motion, driven by the gravitational pull of the moon and sun. At the coast, we see the tide as a twice-daily rise and fall of sea level that moves the edge of the sea up and down a beach or cliff-face. In some places, the tide is small but at others it can rise in a few hours by the height of a three storey building; it then has to be treated with great respect by those who live and work by the sea. In this Very Short Introduction David George Bowers and Emyr Martyn Roberts explore what we know about the tides. Blending clear explanations of well known tidal phenomena with recent insights in the deep ocean and coastal seas, Bowers and Roberts use examples from around the world, to tell the story of the tide, considering its nature and causes, its observation and prediction, and unusual tides and their relevance. They explore why tides have attracted the attention of some of the world's greatest scientists, from the initial challenge of explaining why there are two tides a day when the moon and sun pass overhead just once; a problem that was solved by Isaac Newton. In the 19th century, scientists unravelled the rhythms of the tide; good tidal predictions in the form of tide tables were then possible. The predictions were made on beautiful tide predicting machines constructed of brass and mahogany, some of which can still be seen in maritime museums. In the 20th century, the
importance of tides as mixers of sea water became evident. As Bowers and Roberts explore, tidal mixing of the ocean is essential for maintaining its deep circulation, a key part of the climate-control system of our planet. In inshore waters, tidal mixing enhances biological productivity, influences sea temperature and turbidity and creates dramatic features such as maelstroms and tidal bores. In the 21st century, space probes are examining the effects of tidal processes on the moons of Jupiter and Saturn and the possibility of tidally-heated liquid oceans with their own ecosystems. Looking to the cutting edge of tidal research, Bowers and Roberts also consider how we can study the role of the tide in the geological and biological evolution of our own planet with innovative computer models. ABOUT THE SERIES: The Very Short Introductions series from Oxford University Press contains hundreds of titles in almost every subject area. These pocket-sized books are the perfect way to get ahead in a new subject quickly. Our expert authors combine facts, analysis, perspective, new ideas, and enthusiasm to make interesting and challenging topics highly readable.

David George Bowers is Emeritus Professor of Physical Oceanography at Bangor University. He has taught courses on tides and tidal phenomena for many years. As well as Bangor, he has worked as a Research Fellow at Flinders University of South Australia and has collaborated (and published work) with scientists across the world, including in France, Malaysia, Mozambique and the USA. He has taken part in research cruises in the Indian, Atlantic, and Southern Oceans as well as many voyages in the coastal waters of north-west Europe. David co-authored a popular textbook on oceanography together with David Thomas, Introducing Oceanography (Dunedin Academic Press, 2012). Emyr Martyn Roberts is a researcher at the Department of Biological Sciences and the K.G. Jebsen Centre for Deep Sea Research at the University of Bergen. He has a Ph.D. in Physical Oceanography and his research is centred on how physical phenomena in the sea influence the distribution of flora and fauna at the seabed. He has written peer-reviewed scientific articles about tides and has participated in research cruises in the Pacific, Arctic, and Indian Oceans, and in numerous coastal seas of the North East Atlantic. He currently works on a large, EU-funded project studying deep-sea sponges.