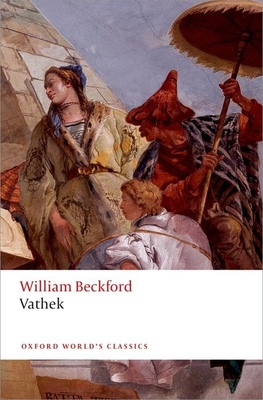 Woe to the rash mortal who seeks to know that of which he should remain ignorant; and to undertake that which surpasseth his power One of the strangest and most unforgettable eighteenth-century novels, Vathek is a wild Gothic fantasy whose sensuous imagination and grotesque comedy have inspired writers from Byron to Lovecraft. The Caliph Vathek is dissolute and debauched, and hungry for knowledge. When the mysterious Giaour offers him boundless treasure and unrivalled power he is willing to sacrifice his god, the lives of innocent children, and his own soul to satisfy his obsession. Vathek's extraordinary journey to the subterranean palace of Eblis, and the terrifying fate that there awaits him, is a captivating tale of magic and oriental fantasy, sudden violence and corrupted love, whose mix of moral fable, grotesque comedy, and evocative beauty defies classification. This new edition reprints Beckford's authorized English text of 1816 with its elaborate and entertaining notes. In his new Introduction, Thomas Keymer pays special attention to the novel's literary qualities, its hybrid nature and its connections with oriental fiction and the Gothic as well as to its origins and Beckford's scandalous public persona. Completely reset, the second edition includes new, fuller notes, an up-to-date bibliography, and a new chronology of the author. About the Series: For over 100 years Oxford World's Classics has made available the broadest spectrum of literature from around the globe. Each affordable volume reflects Oxford's commitment to scholarship, providing the most accurate text plus a wealth of other valuable features, including expert introductions by leading authorities, voluminous notes to clarify the text, up-to-date bibliographies for further study, and much more.

Thomas Keymer has edited Oxford World's Classics editions of Johnson's Rasselas, Defoe's Robinson Crusoe, Richardson's Pamela and Fielding's Joseph Andrews and Shamela. He is the author of numerous critical essays and books, editor of The Cambridge Companion to Laurence Sterne (2009) and co-editor, with Jon Mee, of The Cambridge Companion to English Literature from 1740 to 1830.