People, Parasites, and Plowshares: Learning from Our Body's Most Terrifying Invaders (Hardcover) 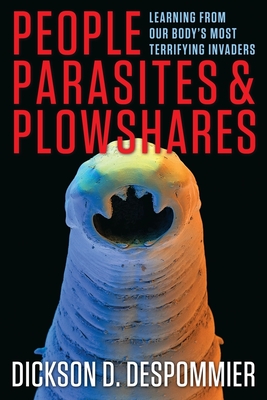 People, Parasites, and Plowshares: Learning from Our Body's Most Terrifying Invaders (Hardcover)

Dickson D. Despommier's vivid, visceral account of the biology, behavior, and history of parasites follows the interplay between these fascinating life forms and human society over thousands of years. Despommier focuses on long-term host-parasite associations, which have evolved to avoid or even subvert the human immune system. Some parasites do great damage to their hosts, while others have signed a kind of "peace treaty" in exchange for their long lives within them. Many parasites also practice clever survival strategies that medical scientists hope to mimic as they search for treatments for Crohn's disease, food allergies, type 1 diabetes, organ transplantation, and other medical challenges.

Despommier concentrates on particularly remarkable and often highly pathogenic organisms, describing their lifecycles and the mechanisms they use to avoid elimination. He details their attack and survival plans and the nature of the illnesses they cause in general terms, enabling readers of all backgrounds to steal a glimpse into the secret work of such effective invaders. He also points to the cultural contexts in which these parasites thrive and reviews the current treatments available to defeat them. Encouraging scientists to continue to study these organisms even if their threat is largely contained, Despommier shows how closer dissection of the substances parasites produce to alter our response to them could help unravel some of our most complex medical conundrums.

Dickson D. Despommier is emeritus professor of public health and microbiology at Columbia University. For thirty-eight years, he taught parasitic diseases to second year medical students at Columbia's medical school. He has won numerous teaching awards, including the prestigious Golden Apple Award for Teaching Excellence from the American Medical Students Association. He is the author of more than seventy peer-reviewed research articles, numerous reviews, and three books, including The Vertical Farm: Feeding the World in the Twenty-First Century. William C. Campbell is a retired senior research scientist at Merck, Inc., Rahway, New Jersey, and winner of the Nobel Prize in Medicine. He discovered and helped develop the drugs thiabendazole, ivermectin, and related derivatives. Both parent compounds have helped to reduce or eliminate certain parasitic worm infections in cattle and humans. He is a world renowned expert on drug discovery, a former president of the American Society for Parasitologists, and is currently a RISE associate at Drew University.