Chronicles of the First Crusade (Paperback) 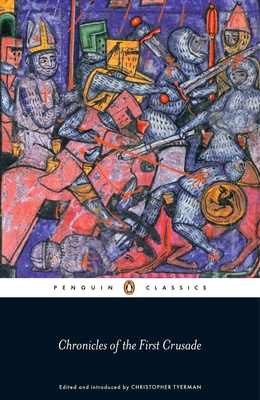 Chronicles of the First Crusade (Paperback)

The fall of Jerusalem in 1099 to an army of exhausted and starving western European soldiers was one of the most extraordinary events in history—with a legacy that remains controversial more than nine centuries later. This remarkable collection contains firsthand accounts from the knights, religious leaders, and peasants who experienced the First Crusade in all its cruelty and strangeness. Edited with an introduction and notes by one of the foremost experts on the Crusades, Chronicles of the First Crusade is a comprehensive look at the climax of Christian fervor and the record of an ultimately futile attempt to implant a European kingdom in an overwhelmingly Muslim world.

For more than seventy years, Penguin has been the leading publisher of classic literature in the English-speaking world. With more than 1,700 titles, Penguin Classics represents a global bookshelf of the best works throughout history and across genres and disciplines. Readers trust the series to provide authoritative texts enhanced by introductions and notes by distinguished scholars and contemporary authors, as well as up-to-date translations by award-winning translators.
Christopher Tyerman is a Fellow and Tutor in History at Hertford College, Oxford and Lecturer in Medieval History at New College Oxford. He has written extensively on the crusades, most recently God's War: A New History of the Crusades (2006) and The Debate on the Crusades (2011).