A Natural History of Beer (Hardcover) 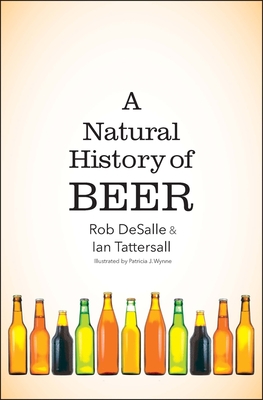 A Natural History of Beer (Hardcover)


Special Order
A celebration of beer—its science, its history, and its impact on human culture

“Curatorial eminences Rob DeSalle and Ian Tattersall serve up a potent scientific brew. . . .  A marvellous paean to the pint, and to the researchers probing its depths.” — Barbara Kiser, Nature

“Forced to choose between this book and a pint of hazy IPA, I would be at a loss. Better to consume them at the same time—both will go down easily, and leave you in an improved condition.”—Bill McKibben

What can beer teach us about biology, history, and the natural world? From ancient Mesopotamian fermentation practices to the resurgent American craft brewery, Rob DeSalle and Ian Tattersall peruse the historical record and traverse the globe for engaging and often surprising stories about beer. They explain how we came to drink beer, what ingredients combine to give beers their distinctive flavors, how beer’s chemistry works at the molecular level, and how various societies have regulated the production and consumption of beer.

Drawing from such diverse subject areas as animal behavior, ecology, history, archaeology, chemistry, sociology, law, genetics, physiology, neurobiology, and more, DeSalle and Tattersall entertain and inform with    their engaging stories of beer throughout human history and the science behind it all. Readers are invited to grab a beer and explore the fascinating history of its creation.
Rob DeSalle is a curator at the Sackler Institute for Comparative Biology and the Program for Microbial Research, American Museum of Natural History, New York City. Ian Tattersall is curator emeritus, Division of Anthropology, American Museum of Natural History.
“Curatorial eminences Rob DeSalle and Ian Tattersall serve up a potent scientific brew in this study of beer, explicating the underlying chemistry, neuroscience and culture with gusto. Crafted as long ago as the seventh millennium bc (in Jiahu, China), the grain-based tipple provides rich pickings, from the intricacies of barley biology and the pedigree of hops to the light absorption in a freshly poured glass of lager, the brain shrinkage behind a hangover headache and possible beer family trees. A marvellous paean to the pint, and to the researchers probing its depths.” — Barbara Kiser, Nature

“Contains keen observations on our species’ curious relationship with beer in all its frothy-or-flat, black-or-golden glory.”—Jazz Shaw, The Washington Examiner

“A Natural History of Beer traverses time and geography to bring the story of beer and its cultural significance to life.”—M.H. Albro, Choice

"Forced to choose between this book and a pint of hazy IPA, I would be at a loss. Better to consume them at the same time—both will go down easily, and leave you in an improved condition."—Bill McKibben, author of Falter: Has the Human Game Begun to Play Itself Out?

“As a ‘natural’ follow-up to A Natural History of Wine, the sequel on beer—a supreme technological achievement of humankind—should prove equally informative and even more engaging for the general reader.”—Patrick McGovern, Scientific Director, Biomolecular Archaeology Project, University of Pennsylvania Museum of Archaeology and Anthropology

“A thorough, thoughtful exploration of the many facets of ‘the most social of beverages,’ which will appeal to beer lovers and general readers alike.”—Theresa McCulla, American Brewing History Initiative, National Museum of American History

“DeSalle and Tattersall deliver a fun, factual, focused look at how beer first happened, how it happens every day, and just what's going on when it lands on your tongue.”—Lew Bryson, Senior Drinks Writer for the Daily Beast