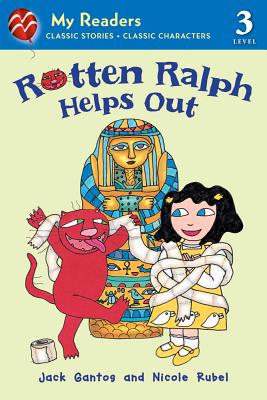 This is book number 1 in the Rotten Ralph Rotten Readers series.

"Rotten Ralph is one cat who can make reading fun for kids. And he does!" --Marc Brown

Sarah needs a topic for her school project on ancient Egypt. Her rotten red cat, Ralph, thinks history is a bore. Only after he spoils a research trip to the library does Ralph decide to help. According to Sarah, the ancient Egyptians believed cats were wise and had special powers. And Rotten Ralph knows he can prove them right!

Jack Gantos has written books for people of all ages, from picture books and middle-grade fiction to novels for young adults and adults. His works include Hole in My Life, a memoir that won the Michael L. Printz and Robert F. Sibert Honors, Joey Pigza Swallowed the Key, a National Book Award Finalist, and Joey Pigza Loses Control, a Newbery Honor book. Jack was born in Mount Pleasant, Pennsylvania, and when he was seven, his family moved to Barbados. He attended British schools, where there was much emphasis on reading and writing, and teachers made learning a lot of fun. When the family moved to south Florida, he found his new classmates uninterested in their studies, and his teachers spent most of their time disciplining students. Jack retreated to an abandoned bookmobile (three flat tires and empty of books) parked out behind the sandy ball field, and read for most of the day. The seeds for Jack’s writing career were planted in sixth grade, when he read his sister’s diary and decided he could write better than she could. He begged his mother for a diary and began to collect anecdotes he overheard at school, mostly from standing outside the teachers’ lounge and listening to their lunchtime conversations. Later, he incorporated many of these anecdotes into stories.  While in college, he and an illustrator friend, Nicole Rubel, began working on picture books. After a series of well-deserved rejections, they published their first book, Rotten Ralph, in 1976. It was a success and the beginning of Jack’s career as a professional writer. Jack continued to write children’s books and began to teach courses in children’s book writing and children’s literature. He developed the master’s degree program in children’s book writing at Emerson College and the Vermont College M.F.A. program for children’s book writers. He now devotes his time to writing books and educational speaking. He lives with his family in Boston, Massachusetts.

Jack Gantos and Nicole Rubel have created the Rotten Ralph Rotten Readers, which launched in 2001 with Rotten Ralph Helps Out. Ms. Rubel lives in Aurora, Oregon.

“Fans of Gantos's irrepressible Ralph who are ready to graduate from picture books will eagerly leap into this early chapter book, the first installment of the Rotten Ralph Rotten Reader series.” —Publishers Weekly, Starred Review

“Rotten Ralph's bouncy, semi-bad behavior and amusing antics have been delighting children for years in the long-running series. . . . Now the irrepressible Ralph has moved on to ‘Rotten Ralph Rotten Readers' in this upper-level easy reader with an Egyptian theme. . . . Rubel's flat, stylized illustrations in full color are a natural complement to the Egyptian style of art, and she adds a good deal of additional information on ancient Egyptian culture through her illustrations.” —Kirkus Reviews

“The text's short sentences and dialogue are basic enough for new readers while imparting plenty of interesting facts about the Egyptians.” —Booklist

“Rotten Ralph is one cat who can make reading fun for kids. And he does!” —Marc Brown