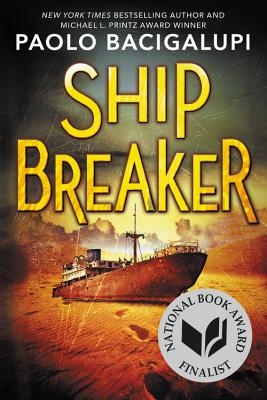 
On Our Shelves Now
This thrilling bestseller and National Book Award Finalist is a gritty, high-stakes adventure of a teenage boy faced with conflicting loyalties, set in a dark future America devastated by the forces of climate change.

In America's flooded Gulf Coast region, oil is scarce, but loyalty is scarcer. Grounded oil tankers are being broken down for parts by crews of young people. Nailer, a teenage boy, works the light crew, scavenging for copper wiring just to make quota--and hopefully live to see another day. But when, by luck or by chance, he discovers an exquisite clipper ship beached during a recent hurricane, Nailer faces the most important decision of his life: Strip the ship for all it's worth or rescue its lone survivor, a beautiful and wealthy girl who could lead him to a better life....

In this powerful novel, Hugo and Nebula Award winning author Paolo Bacigalupi delivers a fast-paced adventure set in the vivid and raw, uncertain future of his companion novels The Drowned Cities and Tool of War.

"Suzanne Collins may have put dystopian literature on the YA map with The Hunger Games...but Bacigalupi is one of the genre's masters, employing inventively terrifying details in equally imaginative story lines." --Los Angeles Times

"Bacigalupi (The Windup Girl) makes a stellar YA debut with this futuristic tale of class imbalance on the Gulf Coast...Bacigalupi's cast is ethnically and morally diverse, and the book's message never overshadows the storytelling, action-packed pacing, or intricate world-building." --Publishers Weekly (starred review)

* "This thriller will grab and keep readers' attentions as Nailer and Nita 'crew up' in their fight to survive."—The Horn Book, starred review

"Exciting, poetic, and breathtaking."—Sherman Alexie, author of The Absolutely True Diary of a Part-Time Indian

"A riveting tale of adventure in a broken world."—Scott Westerfeld, author of the Uglies series and Leviathan

"Barely a chapter into this novel, readers may feel as if they're deep inside the black hold of an oil tanker--in a good way."—New York Times Book Review

"A top-notch dystopian thriller, from its claustrophobic opening pages to its race-against-the-waves ending."—Barry Lyga, author of The Astonishing Adventures of Fanboy and Goth Girl and Boy Toy

"Tough, tense, and terrific--a story that keeps you turning pages while you read, and returning to the tale long after you're done."—John Scalzi, author of Old Man's War

"This gripping novel is all about the nature of trust and of family. . . . Nailer and his intense, beautiful world will linger in your mind for a long time."—Kim Stanley Robinson, author of the Mars trilogy