Are We There Yet? (Hardcover) 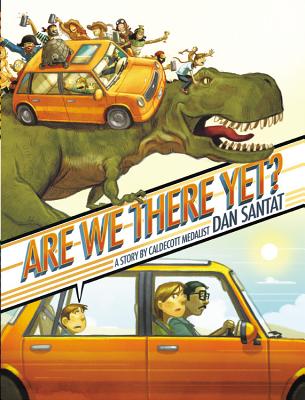 Are We There Yet? (Hardcover)


On Our Shelves Now
Caldecott Medalist Dan Santat--creator of The Adventures of Beekle: The Unimaginary Friend and After the Fall--takes readers on the road trip of a lifetime!

"Are we there yet?" Every parent has heard this classic kid question on a long car ride--and after reading this astonishingly inventive new book (that even turns upside down for several pages!), you'll never look at being bored the same way again.

Let's face it: everyone knows that car rides can be boring. And when things get boring, time slows down. In this book, a boy feels time slowing down so much that it starts going backward--into the time of pirates! Of princesses! Of dinosaurs! The boy was just trying to get to his grandmother's birthday party, but instead he's traveling through Ancient Egypt and rubbing shoulders with Ben Franklin. When time flies, who knows where--or when--he'll end up.
Dan Santat is the Caldecott Medal-winning and New York Times bestselling author and illustrator of The Adventures of Beekle: The Unimaginary Friend, Are We There Yet?, and After the Fall as well as the illustrator of many other picture books, including Crankenstein by Samantha Berger. Dan lives in Southern California with his wife, two kids, and various pets.
Praise for Are We There Yet?
A 2018-2019 Young Hoosier Book Award Nominee

*"The energy of his riotous story...gives it a laser focus. It's a remarkable feat-a turbocharged adventure that's also a meditation on the relative nature of time."—Publishers Weekly, starred review

*"Employing both comic-book-style panels and full-bleed spreads, the mixed-media illustrations are full of humor, and the changes in point of view keep the telling dynamic and engaging....A multilayered, modern-day parable reminding readers there's no greater gift than the present."—Kirkus, starred review

*"Following his Caldecott win for The Adventures of Beekle (2014), Santat offers an imaginative account of a boy's car trip to his grandmother's birthday party.... The inventive format and engrossing artwork will make kids happy to go along for the ride."—Booklist, starred review

"This imaginative take on the never-ending car ride is filled with surprises.... Filled with excitement and humorous details.... Full-spreads, giant comic panels, and alarmed expressions add to the fun."—School Library Journal

"How do you follow up a Caldecott Medal win? If you're Dan Santat (The Adventures of Beekle), you turn the picture book form on its head...Visual clues...add depth and humor."—Horn Book

"Santat digs deep into his stockpile of illustrative tricks to manipulate time and space through clever page turns, comics style sequential frames, background fade outs, and a wealth of loony details to keep viewers scouring the scenes for giggle-worthy details."—BCCB