The War on Normal People: The Truth About America's Disappearing Jobs and Why Universal Basic Income Is Our Future (Paperback) 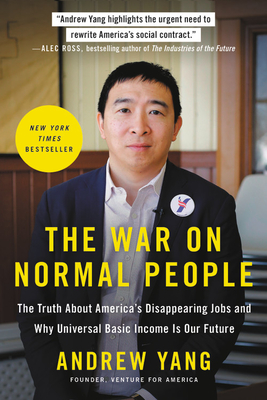 The War on Normal People: The Truth About America's Disappearing Jobs and Why Universal Basic Income Is Our Future (Paperback)


Usually Ships in 1-5 Days
The New York Times bestseller from CNN Political Commentator and 2020 former Democratic presidential candidate Andrew Yang, this thought-provoking and prescient call-to-action outlines the urgent steps America must take, including Universal Basic Income (UBI), to stabilize our economy amid rapid technological change and automation.
The shift toward automation is about to create a tsunami of unemployment. Not in the distant future--now. One recent estimate predicts 45 million American workers will lose their jobs within the next twelve years--jobs that won't be replaced. In a future marked by restlessness and chronic unemployment, what will happen to American society?

In The War on Normal People, Andrew Yang paints a dire portrait of the American economy. Rapidly advancing technologies like artificial intelligence, robotics and automation software are making millions of Americans' livelihoods irrelevant. The consequences of these trends are already being felt across our communities in the form of political unrest, drug use, and other social ills. The future looks dire-but is it unavoidable?

In The War on Normal People, Yang imagines a different future--one in which having a job is distinct from the capacity to prosper and seek fulfillment. At this vision's core is Universal Basic Income, the concept of providing all citizens with a guaranteed income-and one that is rapidly gaining popularity among forward-thinking politicians and economists. Yang proposes that UBI is an essential step toward a new, more durable kind of economy, one he calls "human capitalism."
Andrew Yang is the founder of Venture for America, a major non-profit that places top college graduates in start-ups for two years in emerging U.S. cities to generate job growth and train the next generation of entrepreneurs. Yang has been the CEO, co-founder or executive at a number of technology and education companies. Yang was named a Presidential Ambassador of Global Entrepreneurship and a Champion of Change by the White House and one of Fast Company's "100 Most Creative People in Business." He was also named to the National Advisory Council for Innovation and Entrepreneurship of the Department of Commerce.

A major documentary with an Oscar-winning director, Generation Startup, featuring Yang and Venture for America, was released in Fall 2016 and is available on Netflix and other streaming platforms. He is a graduate of Columbia Law, where he was an Editor of the Law Review, James Kent Scholar and winner of the Class of 1912 Prize, and Brown University where he graduated with degrees in Economics and Political Science.
"Andrew Yang is one of those rare visionaries who puts dreams into action. The War on Normal People is both a clear-eyed look at the depths of our social and economic problems and an innovative roadmap toward a better future."—Arianna Huffington,Founder and CEO of Thrive Global

"This book is a
must read. Andrew Yang is tackling one of the biggest challenges facing our
country the way only an entrepreneur can, but unlike most, he sees the big
picture. Making money is good for you-but building a strong society and strong
people is good for all of us. The topics Andrew addresses in this book aren't
about some dystopian future way down the road. These things
are happening today, and every entrepreneur should read this book to
understand the challenges of the next decade."—Daymond John, starof ABC's Shark Tank, bestselling author of The Power of Broke, andfounder of FUBU

"In this powerful book, Andrew Yang highlights the urgent
need to rewrite America's social contract. In a call to arms that comes from
both head and heart, Yang has made an important contribution to the debate
about where America is headed and what we need to do about it."—Alec Ross, New York Times bestsellingauthor of The Industries of the Future

"America desperately
needs a wake-up call. This book will open your eyes to the ongoing effects of
automation. Fortunately, aside from knowing full well the many challenges we
face, Andrew Yang has a firm grasp of the solutions, most especially our need for
Universal Basic Income. Read this book and hear the urgent call for abundance
over scarcity, and humanity over abject madness. The clock is ticking."—Scott Santens,Director, U.S. Basic Income Guarantee Network

"Andrew Yang writes
with passion and conviction, offering astute analysis--as well as a hopeful
solution--for the looming challenge that may well define the coming decades: How
can we ensure broad-based prosperity in a future where labor-displacing
technology becomes vastly more powerful?"—Martin Ford, NewYork Times bestselling author of Rise of the Robots

"A sobering portrait of a crumbling polity
. . . [and] a provocative work of social criticism."—Kirkus Reviews

"I found [The War on Normal People] fascinating and troubling."—Major Garrett, host of CBS News' "The Takeout"