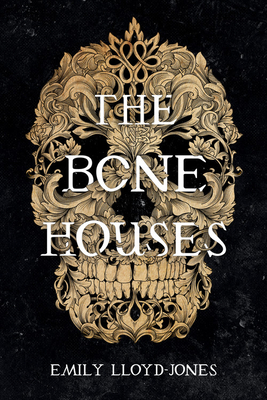 “I immediately fell into the world Emily Lloyd-Jones created, and then I barely came up for air! This is the most original, mythical-magical, undead story I have ever read. I mean, there’s a dead goat — and you’re gonna fall in love with her. The feisty, axe-swinging gravedigger’s daughter found a place in my heart, too. The imagination and wit astound me.”
— Alena Deerwater, Gallery Bookshop & Bookwinkle's Children's Books, Mendocino, CA

Buffy the Vampire Slayer meets Sky in the Deep in this bewitching historical horror novel, perfect for fans of Holly Black and V.E. Schwab.
Seventeen-year-old Aderyn ("Ryn") only cares about two things: her family and her family's graveyard. And right now, both are in dire straits. Since the death of their parents, Ryn and her siblings have been scraping together a meager existence as gravediggers in the remote village of Colbren, which sits at the foot of a harsh and deadly mountain range that was once home to the fae. The problem with being a gravedigger in Colbren, though, is that the dead don't always stay dead.
The risen corpses are known as "bone houses," and legend says that they're the result of a decades-old curse. When Ellis, an apprentice mapmaker with a mysterious past, arrives in town, the bone houses attack with new ferocity. What is it that draws them near? And more importantly, how can they be stopped for good?
Together, Ellis and Ryn embark on a journey that will take them into the heart of the mountains, where they will have to face both the curse and the deeply-buried truths about themselves. Equal parts classic horror novel and original fairy tale, The Bone Houses will have you spellbound from the very first page.
An instant IndieBound bestseller!

Emily Lloyd-Jones grew up on a vineyard in rural Oregon, where she played in evergreen forests and learned to fear sheep. After graduating from Western Oregon University with an English degree, she enrolled in the publishing program at Rosemont College just outside of Philadelphia. She currently resides in Northern California, working as the children's buyer for Gallery Bookshop by day and writing by night. She is the author of Illusive, Deceptive, The Hearts We Sold, and The Bone Houses.
Praise for The Bone Houses:IndieBound BestellerA Fall 2019 Indie Next pick
"A dark, mesmerizing fairy tale reminiscent of the Grimm Brothers, the Brontes, and Neil Gaiman in turn. The Bone Houses is a haunting and hypnotic novel that I drank deeply and savored. Emily Lloyd-Jones is an author who should be on everyone's radar."—Mackenzi Lee, NYT bestselling author of The Gentleman's Guide to Vice and Virtue

* "With ghostly prose...filled with breathless moments and occasional humor...this melancholic horror novel digs its way into the heart."—Booklist, starred review

* "Both exciting and imaginative. Inspired by Welsh mythology, this stand-alone novel is both a classic quest saga and a page-turning horror story.... A required purchase for collections serving young adults, this fine novel will especially appeal to those who enjoy fantasy with more than a touch of terror."—VOYA, starred review

"A new and magical journey, filled with the best parts of a fairy tale. Monsters, curses, love -- both slow-burn and familial -- beautiful descriptions of an eerie mythical Welsh setting, and a streak of humor make this stand-alone novel a must-read."—SLJ

"[Emily] Lloyd-Jones (The Hearts We Sold) creates an evocative world of magic...and plays with the conventions of fairy tales and horror.... The story serves as a meditation on the complicated relationship between the living and the dead, combining fear, humor and enchantment in equal measure."—Publishers Weekly

"Emily Lloyd-Jones has crafted a world of myth and magic, legend and lore, fantasy and fairy tale that has a quality of timelessness about it.... Readers who enjoy fantasy, adventure, horror, and/or folklore will certainly enjoy this novel with its engaging characters and unusual premise."—SLC

"This Welsh-inspired story is haunting and compelling...A stand-alone dark fantasy that readers will want to sink their teeth into."—Kirkus Reviews

"Centered around a truly epic journey, with a satisfying ending and slow-burn love story complicated by the walking dead, The Bone Houses is a horror-drenched fairy tale. Emily Lloyd-Jones spins wit, longing, and loss into something just as magical as the creatures that haunt the night in Ryn and Ellis's world, and the result is a careful, beautiful examination on the impression love leaves behind."—Sarah Henning, author of Sea Witch and Sea Witch Rising

"The Bone Houses is a dark and beautiful book, full of magic, as quiet as death and as powerful as love. Lloyd-Jones gives us a beautiful setting full of vibrant characters that's resonant with gorgeously eerie mythology, plus my absolute favorite literary goat. I loved this book."—Kat Howard, author of An Unkindness of Magicians

"A deliciously monstrous novel, full of the magic of ancient Wales. Reminiscent of Juliet Marillier and Marion Zimmer Bradley. Expect the unexpected in this funny, scary, mysterious, and ultimately unputdownable story!"—Dawn Kurtagich, author of Teeth in the Mist

"Throw excellent world-building, action-packed prose, and incredible representation for chronic pain into a cauldron, and you'll get The Bone Houses, a masterclass on the epic journey archetype with plenty of surprises in store."—Sami Thomason, Square Books

"The Bone Houses is the adventure of a gravedigger and a mapmaker, the story of the place where fable and rumor intersect with real-life danger and quest. Mysterious, earthy, utterly magical."—Anna Bright, One More Page Books

"The Bone Houses is an atmospheric and enthralling tale about life after death that mixes thoughtful characterization with whimsy, horror, and a dash of magic. Emily Lloyd-Jones instantly transports you to a northern Wales of old where the dead rise and legends may turn out to be histories. It pulled me -- and every bone I possess -- in from the start and refused to loosen its hold. It's a book best consumed with the lights on and a hand to hold. You'll definitely need them!"—Kalie Young, Barns & Noble at the Grove, LA

"I immediately fell into the world Emily Lloyd-Jones created, and then I barely came up for air! This is the most original, mythical-magical, undead story I have ever read. I mean, there's a dead goat -- and you're gonna fall in love with her. The feisty, axe-swinging gravedigger's daughter found a place in my heart, too. The imagination and wit astound me. I am a lifelong reader of Lloyd-Jones' books. What's next?"—Alena Deerwater, Gallery Bookshop