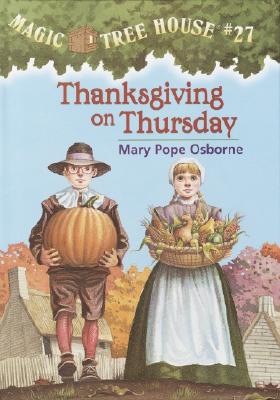 This is book number 27 in the Magic Tree House series.

The Magic Tree House whisks Jack and Annie back to the eve of the first Thanksgiving. There they meet the Pilgrims as well as Squanto, a Native American who helped them. The story offers an age-appropriate, in-depth picture of what life was really like for early settlers, as well as the usual Magic Tree House adventure and excitement.

MARY POPE OSBORNE is the author of the "New York Times" number one bestselling Magic Tree House series. She and her husband, writer Will Osborne (author of "Magic Tree House: The Musical"), live in northwestern Connecticut with their three dogs. Ms. Osborne is also the coauthor of the companion Magic Tree House Fact Trackers series with Will, and with her sister, Natalie Pope Boyce.

SAL MURDOCCA has illustrated more than 200 children's trade and text books. He is also a librettist for children's opera, a video artist, an avid runner, hiker, and bicyclist, and a teacher of children's illustration at the Parsons School of Design. Sal lives and works in New York with his wife, Nancy. "From the Trade Paperback edition."