Spillover: Animal Infections and the Next Human Pandemic (Hardcover) 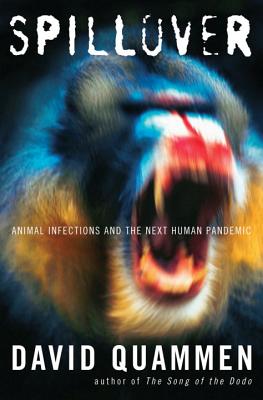 Spillover: Animal Infections and the Next Human Pandemic (Hardcover)

A masterpiece of science reporting that tracks the animal origins of emerging human diseases.

The emergence of strange new diseases is a frightening problem that seems to be getting worse. In this age of speedy travel, it threatens a worldwide pandemic. We hear news reports of Ebola, SARS, AIDS, and something called Hendra killing horses and people in Australia—but those reports miss the big truth that such phenomena are part of a single pattern. The bugs that transmit these diseases share one thing: they originate in wild animals and pass to humans by a process called spillover. David Quammen tracks this subject around the world. He recounts adventures in the field—netting bats in China, trapping monkeys in Bangladesh, stalking gorillas in the Congo—with the world’s leading disease scientists. In Spillover Quammen takes the reader along on this astonishing quest to learn how, where from, and why these diseases emerge, and he asks the terrifying question: What might the next big one be?

David Quammen is the author of The Song of the Dodo, among other books. He has been honored with the John Burroughs Medal for nature writing, an Academy Award in Literature from the American Academy of Arts and Letters, an award in the art of the essay from PEN, and (three times) the National Magazine Award. Quammen is also a contributing writer for National Geographic. He lives in Bozeman, Montana.
Starred review. ...a frightening but critically important book for anyone interested in learning about the prospects of the world’s next major pandemic.
— Publishers Weekly

David Quammen might be my favorite living science writer: amiable, erudite, understated, incredibly funny, profoundly humane. The best of his books, The Song of the Dodo, renders the relatively arcane field of island biogeography as gripping as a thriller. That bodes well for his new book, whose subject really is thriller-worthy: how deadly diseases (AIDS, SARS, Ebola) make the leap from animals to humans, and how, where, and when the next pandemic might emerge.

David Quammen [is] one of that rare breed of science journalists who blend exploration with a talent for synthesis and storytelling.
— Nathan Wolfe - Nature

As page turning as Richard Preston’s The Hot Zone… [Quammen is] one of the best science writers.