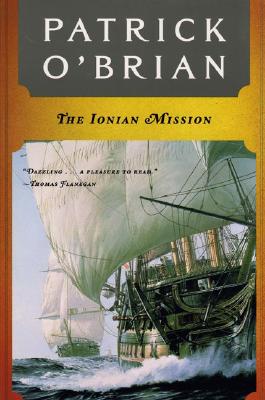 This is book number 8 in the Aubrey/Maturin Novels series.

"O'Brian is one author who can put a spark of character into the sawdust of time, and The Ionian Mission is another rattling good yarn." —Stephen Vaughan, The Observer

Jack Aubrey and Stephen Maturin, veterans now of many battles, return in this novel to the seas where they first sailed as shipmates. But Jack is now a senior captain commanding a line-of-battle ship in the Royal Navy's blockade of Toulon, and this is a longer, harder, colder war than the dashing frigate actions of his early days. A sudden turn of events takes him and Stephen off on a hazardous mission to the Greek Islands, where all his old skills of seamanship and his proverbial luck when fighting against odds come triumphantly into their own.

O'Brian's books are as atypical of conventional sea stories as Conrad's. Like John LeCarré, he has erased the boundary separating a debased genre from 'serious' fiction. O'Brian is a novelist, pure and simple, one of the best we have.
— Mark Horowitz - Los Angeles Times Book Review

They're funny, they're exciting, they're informative...There are legions of us who gladly ship out time and time again under Captain Aubrey.
— The New Yorker