The Reverse of the Medal (Aubrey/Maturin Novels #11) (Paperback) 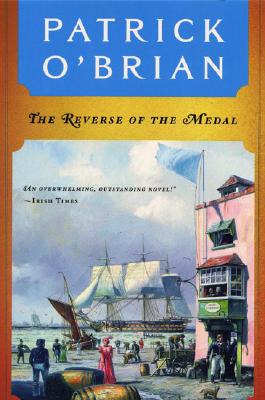 The Reverse of the Medal (Aubrey/Maturin Novels #11) (Paperback)

This is book number 11 in the Aubrey/Maturin Novels series.

Captain Jack Aubrey, R. N., ashore after a successful cruise, is persuaded by a casual acquaintance to make certain investments in the City. This innocent decision ensnares him in the London criminal underground and in government espionage—the province of his friend Stephen Maturin. Is Aubrey's humiliation and the threatened ruin of his career a deliberate plot? This dark tale is a fitting backdrop to the brilliant characterization and sparkling dialogue which O'Brian's readers have come to expect.

[O'Brian's] attention to period speech and detail is uncompromising, and while the cascades of nautical lore can be dizzying, both aficionados and newcomers will be swept up by the richness of Mr. O'Brian's prodigious imagination.
— Scott Veale - New York Times Book Review