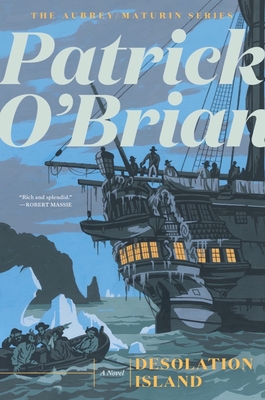 This is book number 5 in the Aubrey/Maturin Novels series.

"The relationship [between Aubrey and Maturin]...is about the best thing afloat....For Conradian power of description and sheer excitement there is nothing in naval fiction to beat the stern chase as the outgunned Leopard staggers through mountain waves in icy latitudes to escape the Dutch seventy-four." —Stephen Vaughan, Observer

Commissioned to rescue Governor Bligh of Bounty fame, Captain Jack Aubrey and his friend and surgeon Stephen Maturin sail the Leopard to Australia with a hold full of convicts. Among them is a beautiful and dangerous spy—and a treacherous disease that decimates the crew. With a Dutch man-of-war to windward, the undermanned, outgunned Leopard sails for her life into the freezing waters of the Antarctic, where, in mountain seas, the Dutchman closes.

One of our greatest contemporary novelists, Patrick O’Brian is the author of the twenty volumes of the best-selling Aubrey/Maturin series, as well as many other books, including Testimonies, The Golden Ocean, The Unknown Shore, and biographies of Joseph Banks and Picasso.
Good history…espionage, romance…and an action at sea that for sheer descriptive power can match anything in sea-fiction.
— Christopher Wordsworth - Guardian

I have been enthralled since reading Master and Commander. Now, having just finished Desolation Island, I find myself curiously anxious to slow down. True, [more] volumes await me, but what I have read is so rich and splendid that I need to ponder and digest.