Will My Cat Eat My Eyeballs?: Big Questions from Tiny Mortals About Death (Hardcover) 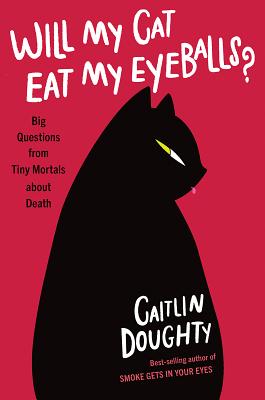 Will My Cat Eat My Eyeballs?: Big Questions from Tiny Mortals About Death (Hardcover)

Winner of the 2019 Goodreads Choice Award for Science & Technology

Every day, funeral director Caitlin Doughty receives dozens of questions about death. The best questions come from kids. What would happen to an astronaut’s body if it were pushed out of a space shuttle? Do people poop when they die? Can Grandma have a Viking funeral?

In Will My Cat Eat My Eyeballs?, Doughty blends her mortician’s knowledge of the body and the intriguing history behind common misconceptions about corpses to offer factual, hilarious, and candid answers to thirty-five distinctive questions posed by her youngest fans. In her inimitable voice, Doughty details lore and science of what happens to, and inside, our bodies after we die. Why do corpses groan? What causes bodies to turn colors during decomposition? And why do hair and nails appear longer after death? Readers will learn the best soil for mummifying your body, whether you can preserve your best friend’s skull as a keepsake, and what happens when you die on a plane.

Beautifully illustrated by Dianné Ruz, Will My Cat Eat My Eyeballs? shows us that death is science and art, and only by asking questions can we begin to embrace it.

Caitlin Doughty is a mortician and the New York Times best-selling author of Smoke Gets in Your Eyes, From Here to Eternity, and Will My Cat Eat My Eyeballs? She is the creator of the web series Ask a Mortician, and the founder of The Order of the Good Death. She lives in Los Angeles, California, where she owns a funeral home.
My daughter hasn’t put it down. She reads it out loud to me while we giggle.
— Kari Byron, author of Crash Test Girl and former host of Mythbusters

Will My Cat Eat My Eyeballs? is funny, dark, and at times stunningly existential, revealing not only how little we understand about death, but also how much kids can handle.

[E]very one of Doughty’s answers serves as a charming guide into something we take enormous pains to avoid.
— B. David Zarley - Paste Magazine

There’s serious science here, but also cultural lessons in death and dying, a little history, and a touch of gruesomeness wrapped in that shroud of sharp, witty humor.
— Terri Schlichenmeyer - Philadelphia Tribune

Doughty's writing is unusually conversational in tone for a book with subjects that can be considered taboo. Not only does she manage to make it extremely informative, throughout she includes her comments with sometimes profound thoughts, real humor and a significant dose of brilliant wit.
— Pamela Kramer - BookReporter

[Doughty] provides answers to questions both humorous and moving, bringing tiny and full-sized mortals alike to a greater comfort with and understanding of the one transition that will happen to us all.
— Anna Spydell - BookPage

With every ounce of straight-talking spunk one could muster for this topic, Doughty delivers a surprisingly heart-warming read.
— Christy Lynch - BookPage

[A] delightful mixture of science and humor.
— Library Journal

Doughty's answers are as delightful and distinctive as the questions. She blends humor with respect for the dead ... Her investigations of ritual, custom, law and science are thorough, and she doesn't shy from naming the parts of Grandma's body that might leak after she is gone.
— Julia Kastner - Shelf Awareness

Will My Cat Eat My Eyeballs? is morbidly funny and frank, lighthearted and informative…[A] delight for all and a must for adults who might fall victim to a barrage of childhood questions.