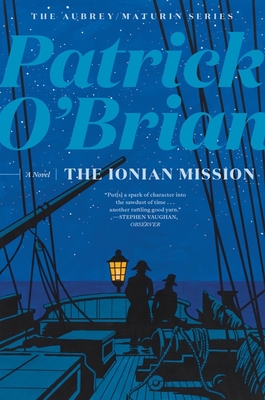 This is book number 8 in the Aubrey/Maturin Novels series.

"O'Brian is one author who can put a spark of character into the sawdust of time, and The Ionian Mission is another rattling good yarn." —Stephen Vaughan, The Observer

Jack Aubrey and Stephen Maturin return in this novel to the seas where they first sailed as shipmates. But Jack is now a senior captain commanding a line-of-battle ship in the Royal Navy’s blockade of Toulon, and this is a longer, harder, colder war than the dashing frigate actions of his early days. A sudden turn of events takes him and Stephen off on a hazardous mission to the Greek Islands, where all his old skills of seamanship and his proverbial luck when fighting against odds come triumphantly into their own.

One of our greatest contemporary novelists, Patrick O’Brian is the author of the twenty volumes of the best-selling Aubrey/Maturin series, as well as many other books, including Testimonies, The Golden Ocean, The Unknown Shore, and biographies of Joseph Banks and Picasso.
Patrick O’Brian is unquestionably the Homer of the Napoleonic wars.
— James Hamilton-Paterson - New Republic