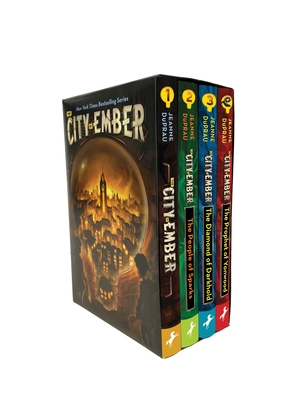 With more than 3.5 million copies sold, the City of Ember books are modern-day classics. Lina and Doon's heart-pounding journey to save their people has captivated readers around the world, and the four adventures are boxed together here for the very first time!

Escape the Dark. Discover the Adventure.

The city of Ember was built as a last refuge for the human race. But now with terrifying blackouts sweeping through the streets, Lina and Doon know it’s only a matter of time before the lights go out and never come back on again. When Lina finds part of an ancient message, she’s sure it holds a secret that will save Ember. Together, she and Doon explore long-forgotten parts of their dying city as they race to solve the mystery. If they succeed, they will have to convince everyone to follow them into danger and an exciting new world. But if they fail? The lights will burn out and the darkness will close in forever.

This complete boxed set includes:
The City of Ember
The People of Sparks
The Diamond of Darkhold
The Prophet of Yonwood
JEANNE DuPRAU is the New York Times bestselling author of the City of Ember books, which have been translated into multiple languages and are an award-winning staple in elementary school classrooms. She's also the author of Escape the Vortex, a title in the multiplatform sci-fi adventure series Voyagers. Jeanne lives in Menlo Park, California. Visit her website at jeanneduprau.com.