Geno: In Pursuit of Perfection (Hardcover) 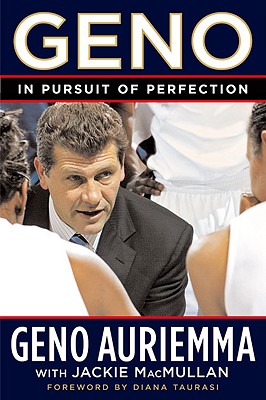 Geno: In Pursuit of Perfection (Hardcover)


Usually Ships in 1-5 Days
Controversial, confrontational, and driven, Coach Geno Auriemma is a force to be reckoned with -- and the most accomplished male coach in women's basketball today.
In his relentless quest for excellence at the University of Connecticut, he has led the Huskies to five national championships. Yet his soul never rests. For Auriemma, life affords only the briefest moments of happiness -- a good round of golf, forty minutes of great basketball, a day at the beach with his family, a nice glass of wine -- while disaster is seemingly always waiting to strike. It's a fatalistic philosophy, a remnant of his hardscrabble early years, but it's an outlook that has driven him to unparalleled success.

In this deeply personal memoir, Geno Auriemma reveals for the first time the man behind the legend. He talks candidly about his coaching style, famed for being one of the most demanding in all the sports world. He spills the beans about his stormy dealings with other coaches such as his archrival, Pat Summitt, of the University of Tennessee. And with warmth and a genuine love for his champions, he writes openly about Diana Taurasi, Sue Bird, Nykesha Sales, Rebecca Lobo, Swin Cash, and all of his other UConn stars who have gone on to stellar WNBA careers. You get a courtside seat to all of the action -- including an epilogue on the 2004-05 season, as well as interviews with the team's most celebrated players.
A rare look inside the soul of a true competitor, GENO is the story of how one passionate man overcame his own fears to achieve an extraordinary record of success.
Geno Auriemma is, by all accounts, the top women's college basketball coach in the country. In addition to his great success at UConn, he was just named to coach the US Olympic women's basketball team at the 2012 Olympics in London.

Jackie MacMullan is one of the nation's premier sportswriters. A top college basketball player herself, she appears on a regular basis on ESPN and for many years was a sports columnist at the Boston Globe. She was the co-author of Larry Bird's book on coaching, Bird Watching, and served as the co-author of the forthcoming When the Game Was Ours by Magic Johnson and Larry Bird.