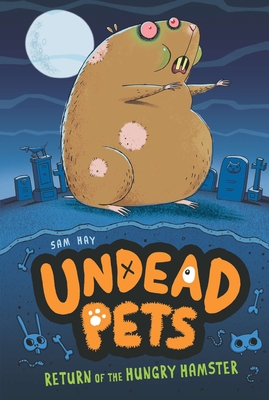 This is book number 1 in the Undead Pets series.

Dumpling the hamster came to a dusty end inside a vacuum cleaner. He suspects that his owner Oliver's parents never admitted to their son that they were to blame for Dumpling's demise. Now the hamster needs Joe's help to reveal the truth - but there's a furry surprise awaiting them at Oliver's house...
Sam Hay grew up in Scotland. A former journalist, she has written several children's books. She lives with her husband, two children, and several pets in a small house with a big garden.
The Return of the Hungry Hamster is a funny, rather than scary, ghost story. Being a ghost doesn't stop Dumpling causing all sorts of havoc, getting Joe into trouble at home and at school and eating everything in sight!  There's the right amount of grossness and ghoulishness to appeal to kids without going over the top. Illustrated throughout - and with some cartoon sections - it's sure to appeal to the younger but fairly confident reader - maybe 7 and up, though even I enjoyed it! A great Halloween read.