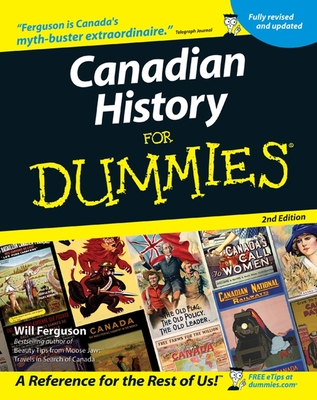 This new edition of Canadian History For Dummies takes readers on a thrilling ride through Canadian history, from indigenous native cultures and early French and British settlements through Paul Martin's shaky minority government. This timely update features all the latest, up-to-the-minute findings in historical and archeological research. In his trademark irreverent style, Will Ferguson celebrates Canada's double-gold in hockey at the 2002 Olympics, investigates Jean Chr tien's decision not to participate in the war in Iraq, and dissects the recent sponsorship scandal.

Will Ferguson has lived and worked in every region of Canada, from the Okanagan Valley of BC to the farmlands of rural Quebec, from Saskatoon to southern Ontario, from Manitoba to PEI. He is the author of several bestselling books on Canadian history and culture, including the Leacock Medal for Humour-winning Beauty Tips from Moose Jaw (a travel memoir), and Bastards & Boneheads (a study in Canadian leadership styles). With his brother Ian, he wrote the wildly successful humour book How to Be a Canadian, which sold over 145,000 copies and won the Libris Award for Non-Fiction Book of the Year. Will's debut novel Happiness (originally published under the title Generica) won the Leacock Medal for Humour and the Canadian Authors Association Award for Fiction. It has been published in 31 countries and 24 languages around the world.