The School for Scandal (Paperback) 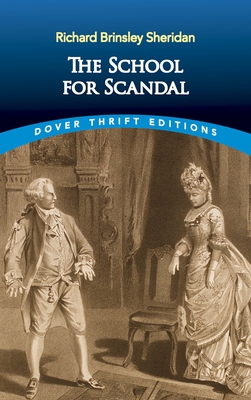 The School for Scandal (Paperback)


On Our Shelves Now
The intrigues of such aptly named characters as Lady Sneerwell, Sir Joseph Surface, Lady Candour, and Sir Benjamin Backbite have amused theater audiences for more than two centuries. They are the invention of the Irish-born playwright Richard Brinsley Sheridan, and they unfold, collide, and backfire hilariously in his masterpiece, The School for Scandal, a play still considered by many the best comedy of manners in English.
It is a comedy with two plots, one involving Sir Oliver Surface's attempts to discover the worthier of his two nephews, and the other unleashing Lady Sneerwell's strategies to ensnare both nephews and the hapless Lady Teazle in her designs. Both plots converge brilliantly in the screen scene -- one of the most famous in all of theater.
The School for Scandal reveals not only Sheridan's mastery of the mechanics of stage comedy, but also his flair for witty dialogue and obvious delight in skewering the affectation and pretentiousness of aristocratic Londoners of the 1770s. Its evergreen appeal makes it one of the most produced of all theater classics today, and one of the most delightful to read.
Irish satirist; Irish playwright; Irish poet; London Theatre Royal; Drury Lane; The Rivals; The Duenna; A Trip to Scarborough; Whig MP; British House of Commons for Stafford; Westminster; Ilchester; Poets' Corner in Westminster Abbey; London; Drury Lane Theatre; Lady Sneerwell; Snake; Sir Peter Teazle; Maria; Charles; Joseph Surface; Lady Teazle; Sir Benjamin Backbite; Crabtree; Rowley; Indies