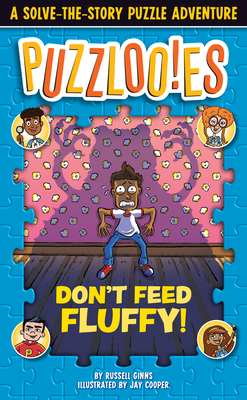 
On Our Shelves Now
Snag a pencil. Sink into the story. Solve the puzzles—and save the day!

Say goodbye to boring downtime and hello to Puzzlooies!, the latest in portable entertainment. Meant for kids to write in, these illustrated compact books flip up like a reporter’s notebook, making them perfect for fast fun while on the go. Each zany adventure is packed with eclectic puzzles to decipher and decode—as well as jokes, riddles, and true trivia galore that’ll keep readers laughing till the very end . . . if they can reach it!

In Don’t Feed Fluffy, accident-prone Carlos has trouble keeping his after-school jobs. He's flooded Superstar Golf Center, caused Cupcake Castle to collapse, coated Waffle Planet in syrup, and even made a mega-mess of Movierama with its own popcorn maker. So when he takes a job from his sister’s dog-walking business, he figures it’ll be easy money. Anyone can handle a cute pup named Fluffy, right? Except there’s more to Fluffy than Carlos realizes . . .

Solve the puzzles inside to see if Carlos survives the night. Especially since he's about to break the number one rule: Don’t. Feed. Fluffy!
RUSSELL GINNS is a writer and game designer who specializes in puzzles, songs, and smart fun. He has worked on projects for a wide variety of organizations, corporations, and publications, including Sesame Workshop, Girl Scouts of America, Nintendo, and Scientific American. Russell lives and writes in Washington, D.C. He is the author of the Samantha Spinner book series, among others. To learn more about him, follow @rginns on Twitter.