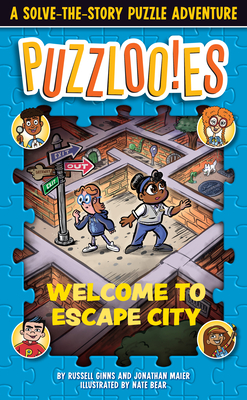 Snag a pencil. Sink into the story. Solve the puzzles—and save the day!

Say goodbye to boring downtime and hello to Puzzlooies!, the latest in portable entertainment. Meant for kids to write in, these illustrated and compact books flip up like a reporter’s notebook, making them perfect for fast fun while on the go. Each zany adventure is packed with eclectic puzzles to decipher and decode—as well as jokes, riddles, and true trivia galore that’ll keep readers laughing till the very end . . . if they can reach it!

In Welcome to Escape City, Sophie is returning home with her middle school’s checkers team after winning a national tournament. She should be celebrating like everyone else . . . if only anyone else noticed her. Relegated to the team “water captain,” Sophie is invisible to her classmates. The only person who talks to her is Mac, the kind woman driving their bus. But when Mac makes a wrong turn, Sophie and the checkers team end up trapped in a strange place they’ve never seen before, called Escape City. Population: Who?

Solve the puzzles inside to read on and see if Sophie and her classmates can break free from a city-sized, real-life escape room.
RUSSELL GINNS is a writer and game designer who specializes in puzzles, songs, and smart fun. He has worked on projects for a wide variety of organizations, corporations, and publications, including Sesame Workshop, Girl Scouts of America, Nintendo, and Scientific American. Russell lives and writes in Washington, D.C. He is the author of the Samantha Spinner book series, among others. To learn more about him, follow @rginns on Twitter.