The Ire of Iron Claw: Gadgets and Gears, Book 2 (Paperback) 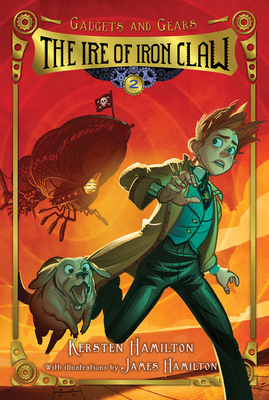 The Ire of Iron Claw: Gadgets and Gears, Book 2 (Paperback)

This is book number 2 in the Gadgets and Gears series.

The evil magicians called the Mesmers are still plotting to take over the world, and the Kennewicketts, recently recruited into the spy business by President Roosevelt, are at the center of the battle for world domination. Now the Amazing Automated Inn has been compromised: someone is smuggling secrets out of the lab and selling them to unscrupulous sorts in Italy. Worse, their friend Nikola Tesla's latest invention—a device that will provide a limitless and free source of electrical power for all—has been sabotaged.      Determined to stop the villains, the Kennewicketts and their staff of automatons travel to Italy in the Daedalus, a lighter-than-air ship. At first, the trip goes as planned, but then another airship manned by murderous sky pirates chases the family over the Atlantic. Luckily, Wally's latest invention, a man-lifting kite, allows them to reach land safely, where they are rescued by the Arachne, a giant steam-powered mechanical spider with a luxury yacht interior that can move at over seventy miles-per-hour! An exciting adventure over the Alps aboard Arachne with the pirates in pursuit ends in Italy, where the Kennewicketts and their robotic staff must face the perilous pigeon Iron Claw and Madini, leaders of the Mesmers, alone.      Will Wally, the noble boy scientist, and his daring dachshund, Noodles, be able to defeat the Mesmers and their minions a second time? Or will the darker side of the Kennewickett family line prevail?

Kersten Hamilton is the author of several picture books and many novels, including the middle grade Gadgets and Gears series and the critically acclaimed YA trilogy The Goblin Wars. She splits her time between her home in Albuquerque, New Mexico, and her farm in Kentucky. For more about Kersten, please visit www.kerstenhamilton.com.

James Hamilton is an artist and designer who lives in San Mateo, California.
"The swift pace, quirky humor, and general steampunkery should hold the interest of readers—especially the mechanically and electronically inclined."
—Kirkus

Praise for The Mesmer Menace: Gadgets and Gears, Book One Winter 2013–14 Kids' Indie Next List  "Fast paced and funny, with plenty of alliteration and word definitions provided by Noodles, it carries hints of both Lemony Snicket’s wordplay and the absurdity of M. T. Anderson’s Pals in Peril series. . . . Young, precocious readers and older readers looking for a shorter read will enjoy this first title in the Gadgets and Gears series." —Booklist