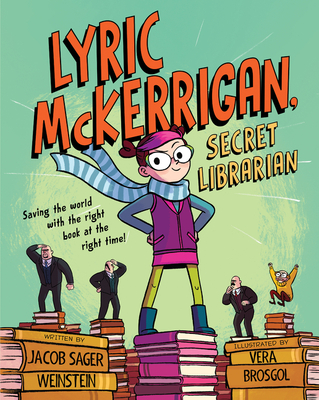 A super-secret operative saves the world from a diabolical threat through her ability to brandish just the right book at just the right time in this delightfully silly superhero tale illustated by Eisner Award-winner and Caldecott Honoree Vera Brosgol.

When an evil genius has a diabolical plan to destroy every book on the planet, who has the tome-toting page power to thwart his dastardly scheme?

Vera Brosgol was born in Moscow, Russia and moved to the United States when she was five. Her first graphic novel, Anya's Ghost, won Eisner, Cyblis, and Harvey awards. Her picture book Leave Me Alone! received a Caldecott Honor. She was a storyboard artist at Laika for ten years, working on films including Coraline and Kubo and the Two Strings. She lives in Portland, Oregon. Visit her online at verabee.com and on Twitter  and Instagram @verabee.

"Brosgol packs the illustrations with amusing details that add something new to discover with every reading...An exciting escapade with an unlikely hero and a not-so-secret message about the power of books." — Kirkus Reviews

"What if there were a superhero who could give people in trouble the very book they need most? Weinstein (Hyacinth and the Secrets Beneath) spins this winning concept out with cheeky hilarity...Caldecott Honor–winning artist Brosgol (Leave Me Alone!) draws heroes and evildoers with wit." — Publishers Weekly

"Brosgol’s confident line work, vibrant colors, and judicious panel placement allow for the jokes to shine and for the fanciful, energetic plot to move at a thrilling, action-packed pace." — Horn Book Magazine

"The message here: to every reader their book—and what a difference that can make!" — Booklist