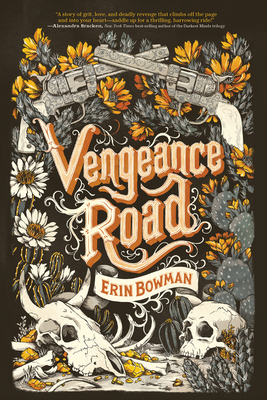 
Special Order
When Kate Thompson’s father is killed by the notorious Rose Riders for a mysterious journal that reveals the secret location of a gold mine, the eighteen-year-old disguises herself as a boy and takes to the gritty plains looking for answers and justice. What she finds are devious strangers, dust storms, and a pair of brothers who refuse to quit riding in her shadow. But as Kate gets closer to the secrets about her family, she gets closer to the truth about herself and must decide if there's room for love in a heart so full of hate.      In the spirit of True Grit, the cutthroat days of the Wild West come to life for a new generation.


Erin Bowman is the critically acclaimed author of numerous books for children and teens, including the Taken Trilogy, Vengeance Road, Retribution Rails, the Edgar Award-nominated Contagion duology, The Girl and the Witch’s Garden, and the forthcoming Dustborn. A web designer turned author, Erin has always been invested in telling stories–both visually and with words. Erin lives in New Hampshire with her husband and children.
"Teens sick of books that coddle them will enjoy sinking their teeth into Bowman's latest...the book demands the same stoicism from its readers as the heroine herself possesses." —School Library Journal   * "Kate's pursuit of the murderous Rose Riders, intertwined with gold-rush greed driving men to madness, makes for a thoroughly engrossing read." —Publishers Weekly, starred review   "[Kate] is a hard-riding, tough-talking young woman who can shoot to kill. The story is hers to tell." —VOYA   "Readers will be entranced by Bowman's swiftly paced, romantic revenge drama, and historical fiction fans will relish the period clothing, western dialect, and details of everyday life. With plot twists galore and a nice surprise at the end, it's a page turner." —Booklist   “A story of grit, love, and deadly revenge that climbs off the page and into your heart–saddle up for a thrilling, harrowing ride!” —Alexandra Bracken, New York Times best-selling author of The Darkest Minds trilogy     “A take-no-prisoners heroine with a bloody debt to settle. I’m still breathing in the dust and hot Arizona sun.” —Megan Shepherd, author of The Madman’s Daughter     “Gritty and honest, Vengeance Road captures the heart of the Wild West.” —Mindy McGinnis, author of Not a Drop to Drink     “Thrilling. . . . Kate is a heroine to be reckoned with.” —Jessica Spotswood, author of The Cahill Witch Chronicles     “Relentlessly readable, Vengeance Road is a perfect Western. You won’t be able to turn in until you get to the very last page!” —Saundra Mitchell, author of The Springsweet     “Flinty and fierce, Kate is a formidable addition to the pantheon of tough young adult heroines. Her story and voice crackles to life." —A.C. Gaughen, author of the Scarlet Trilogy   “Gold madness, a good-for-nothing posse, and frontier justice: Vengeance Road is everything you could want in a Western.” —Jodi Meadows, New York Times best-selling author with My Lady Jane  “This is the kind of book I’ll re-read again and again.” —Susan Dennard, author of the Something Strange and Deadly series