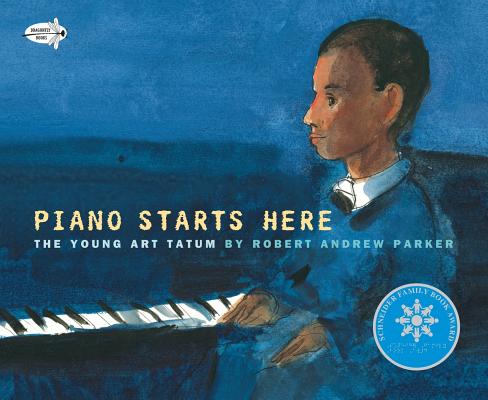 
On Our Shelves Now
Regardless of whether they’ve heard of jazz or Art Tatum, young readers will appreciate how Parker uses simple, lyrical storytelling and colorful, energetic ink-and-wash illustrations to show the world as young Art Tatum might have seen it. Tatum came from modest beginnings and was nearly blind, but his passion for the piano and his acute memory for any sound that he heard drove him to become a virtuoso who was revered by both classical and jazz pianists alike. Included in the back matter is a biography and bibliography.
Robert Andrew Parker has illustrated numerous acclaimed books for children, including the Caldecott Honor Book Popcorn and Ma Goodness by Edna Mitchell Preston, the Boston Globe–Horn Book Award winner Cold Feet by Cynthia DeFelice, and Action Jackson by Jan Greenberg and Sandra Jordan, which received six starred reviews and was named a Robert F. Sibert Honor Book. Mr. Parker is a jazz musician. He lives in West Cornwall, Connecticut.
Starred review, Kirkus Reviews, December 15, 2007:
“Fusing Parker’s artistic talent and passion for jazz (he’s a musician, too), this sensitively embellished biography is totally on time.”

Starred review, Booklist, February 2, 2008:
“The simple, direct language shows the power of the music for both Tatum and his listeners.”

Review, The San Francisco Chronicle, February 24, 2008:
"It's a joyful portrait of an innovative artist who was peerless in music ... A jazz musician himself, Parker brings a deep love and understanding to his subject."