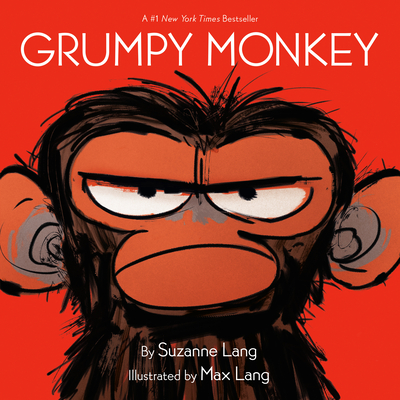 
On Our Shelves Now
The hilarious #1 New York Times bestselling picture book about a chimpanzee in a very bad mood--perfect for young children learning how to deal with confusing feelings.

Jim the chimpanzee is in a terrible mood for no good reason. His friends can't understand it--how can he be in a bad mood when it's SUCH a beautiful day? They have lots of suggestions for how to make him feel better. But Jim can't take all the advice...and has a BIT of a meltdown. Could it be that he just needs a day to feel grumpy?

Suzanne and Max Lang bring hilarity and levity to this very important lesson on emotional literacy, demonstrating to kids that they are allowed to feel their feelings.

Jim Panzee is back and grumpier than ever in Grumpy Monkey: Party Time and Grumpy Monkey: Up All Night!
Suzanne Lang is the author of the New York Times bestselling Grumpy Monkey books as well as several other titles. When she’s not writing books, Suzanne writes for animation. When she’s not doing that, she hangs out with her very funny kids, feeds her many pets, and tries (but usually fails) to take a nap!

Max Lang has illustrated over 20 books including all of the books in the Grumpy Monkey series. When he is not making books he makes films. He has co-directed several animated films including The Snail and the Whale, Zog, Room on the Broom, and The Gruffalo. He has received a BAFTA, two Emmys, two Oscar nominations, and many other honors for his film work. In his spare time he tries to make his kids laugh with dad jokes, and when he inevitably fails, he takes his dogs for a walk.
"Bright watercolors of animals doing their thing are winning accompaniments to the narrative’s welcome message that it’s OK to be down sometimes." —School Library Journal