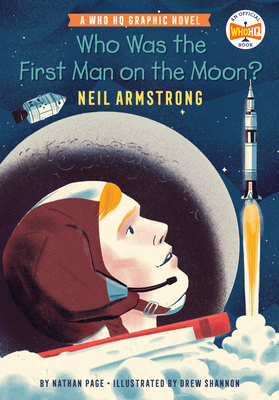 
On Our Shelves Now
Discover the story behind Neil Armstrong and the Apollo 11 mission in this immersive graphic novel -- by Montague Twins creative duo Nathan Page and Drew Shannon.

Presenting Who HQ Graphic Novels: an exciting new addition to the #1 New York Times Best-Selling Who Was? series!

From his childhood experiments to his first encounters with flight, explore the steps Neil Armstrong took in order to become the first person to land on the moon. A story of calculated risk, perseverance, and earth-defying reward, this graphic novel invites readers to immerse themselves in the life of the famous astronaut -- brought to life by gripping narrative and vivid full-color illustrations that fly off the page.
Nathan was born in Kingston, Ontario, where he began writing at an early age. He now lives in Toronto with his cat, Marlowe. He is the writer of the graphic novel The Montague Twins: The Witch's Hand.

Drew Shannon is a Toronto-based illustrator and cartoonist. He loves all things Apollo 11 and recently built a Saturn V rocket with LEGO! More of his work can be found at www.drewshannon.ca