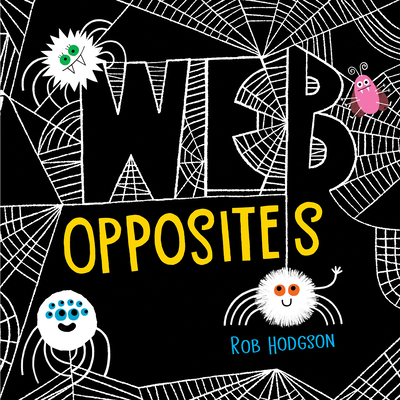 
On Our Shelves Now
Spiders with personality use their webs to demonstrate opposites in this clever concept board book.

Sixteens pairs of opposite words are presented with wit, whimsy, and webs. Familiar opposites like day and night are presented alongside more unexpected pairs like visible and invisible, proving that there's no web these silly spiders can't spin! Young readers will stretch both their imaginations and vocabularies as they laugh along with our eight-eyed, eight-legged friends.
Rob Hodgson was born in a seaside town in the south of England in 1988. He studied illustration at Plymouth University. Today he lives in Bristol, where he spends his days making a mess and turning it into quality illustration projects and books. He cites Yoko Ono, Ed Templeton, and Arthur Russell among his influences. Working with traditional and lo-fi techniques such as block printing and wood cut, along with digital processes, Rob combines old and new approaches to create his work. His books have been translated into a dozen languages and his first author-illustrated book, The Cave, was chosen by Book Trust to be given free to every preschool-aged child in England. His interests include animals, skateboards, the psychology of perception, and collecting strange toys.