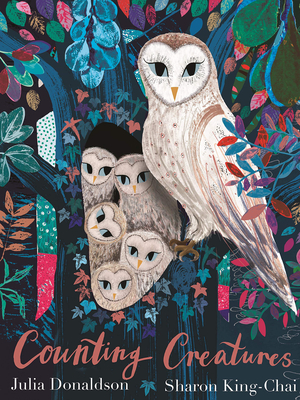 “What a gorgeous book! I loved Animalphabet, and this goes perfectly on the shelf with it. Did you know that a baby arctic hare is called a leveret? This book taught me that!”
— Tegan Tigani, Queen Anne Book Company, Seattle, WA

A gorgeous lift-the-flap counting book that pairs parent animals with their babies, from the bestselling author of Room on the Broom.

From a bat and its pup, to a frog and its twelve tadpoles, young readers will delight in counting each creature's babies and learning unusual scientific names for young animals. With rhyming text, lift-the-flaps and peekaboo holes, and a surprise search-and-find element, this is a read-aloud delight and preschool must-have.

Julia Donaldson is the internationally bestselling author of many popular books for children. Her Smarties Prize-winning modern classic, The Gruffalo, has sold more than 13.5 million copies worldwide, and the Halloween favorite Room on the Broom is a perennial best seller. In addition to children's books, she has written many children's plays and songs and runs regular storytelling workshops. She was the Waterstones Children's Laureate from 2011-2013.

Sharon King-Chai grew up in Australia, and now lives in London. A talented illustrator and designer, she has worked on album covers, book covers, stationery, and six picture books. She has a passion for innovation, and her artwork and clever use of paper cutting encourage readers to think differently about the pages they hold in their hand.
Accolades for Julia Donaldson
Waterstones Children's Laureate, 2011-2013
Nestle Smarties Book Prize (The Gruffalo)
Blue Peter Best Book to Read Aloud (The Gruffalo, Room on the Broom, The Spiffiest Giant in Town, The Snail and the Whale)
Scottish Children's Book Award (Room on the Broom, What the Ladybird Heard)
Book Trust Early Years Award (The Snail and the Whale)
Children's Book of the Year at the British Book Awards (The Gruffalo's Child)