From Bad to Cursed (The Witches of Thistle Grove #2) (Paperback) 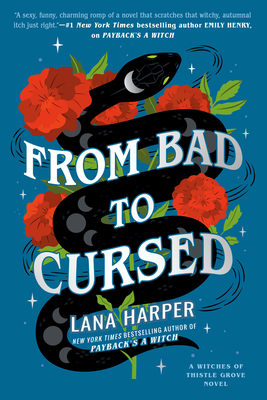 From Bad to Cursed (The Witches of Thistle Grove #2) (Paperback)

This is book number 2 in the The Witches of Thistle Grove series.

Wild child Isidora Avramov is a thrill chaser, adept demon summoner, and—despite the whole sexy-evil-sorceress vibe—also a cuddly animal lover. When she’s not designing costumes and new storylines for the Arcane Emporium’s haunted house, Issa's nursing a secret, conflicted dream of ditching her family’s witchy business to become an indie fashion designer in her own right.

But when someone starts sabotaging the celebrations leading up to this year’s Beltane festival with dark, dangerous magic, a member of the rival Thorn family gets badly hurt—throwing immediate suspicion on the Avramovs. To clear the Avramov name and step up for her family when they need her the most, Issa agrees to serve as a co-investigator, helping none other than Rowan Thorn get to the bottom of things.

Rowan is the very definition of lawful good, so tragically noble and by-the-book he makes Issa’s teeth hurt. In accordance with their families’ complicated history, he and Issa have been archenemies for years and have grown to heartily loathe each other. But as the unlikely duo follow a perplexing trail of clues to a stunning conclusion, Issa and Rowan discover how little they really know each other… and stumble upon a maddening attraction that becomes harder to ignore by the day.
Lana is the author of four YA novels about modern-day witches and historical murderesses. Born in Serbia, she grew up in Hungary, Romania, and Bulgaria before moving to the US, where she studied psychology and literature at Yale University, law at Boston University, and publishing at Emerson College. She recently moved to Chicago with her family.
"I am happily and completely under the spell of The Witches of Thistle Grove series."—Emily Henry, New York Times bestselling author of People We Meet on Vacation

"The only flaw in Lana Harper's magical, whimsical, sexy-as-hell The Witches of Thistle Grove series is that I can't set up shop in Thistle Grove myself right this second! These books truly do cast a spell."—Erin Sterling, New York Times bestselling author of The Ex Hex

“Clever, fiery, and so much fun. From Bad to Cursed is a sharply written romp with wicked imagination. It's pure magic.”—Rachel Harrison, author of Cackle

“Enemies-to-lovers set among rival witch families in a magical town—say no more.”—USA Today

“Harper (Payback’s a Witch) continues “The Witches of Thistle Grove” series strong, delivering a second installment packed with mystery, danger, lots of love-to-hate-you foreplay, family drama, and an identity crisis thrown in. Sound like a lot? It is, but still oh so fun. Highly recommended.”—Library Journal, starred review

“Atmospheric and lush, this captivating story ignites the senses. The magic lends itself to big, cinematic scenes, while conflicts about familial expectations and mental health struggles ground the story with realness. The romantic relationship is emotionally rich and deliciously sexy. Issa’s wry first-person narrative effortlessly ties together the mystery, fantasy, and romance elements.”—Kirkus, starred review

“Lana Harper has created an enthralling witchy world, filled with wonderfully offbeat and diverse characters. The rom-com is spiced with moments of danger and horror and is an entertaining read.”—Philadelphia Inquirer

“Harper knows how to summon a wickedly charming read with Practical Magic vibes, and From Bad to Cursed is another feather in her very pointy hat."—Entertainment Weekly

“These books are intensely queer, honest, and essentially kind. I adore them so."—Seanan McGuire, New York Times bestselling author of That Ain't Witchcraft

“With a fresh, fun voice, Harper brilliantly blends romance, mystery, and magic. Series fans will not be disappointed.”—Publishers Weekly

“Rarely is the second book in a series better than the first, but as Harper continues her Witches of Thistle Grove series, following Payback's a Witch, the world building and exploration of family cultures enhances this already fascinating setting…Harper's latest is imaginative and captivating.”—Booklist

“Lana Harper’s second witchy romance is a knockout winner full of chemistry, magic and hope.”—Romance by the Book

“The mystery, fantasy, and romance blended together perfectly, none overtaking the story and all somehow contributing to a fascinating story of family and feuds. This was a very fun witchy read that is perfect for spring.”—The Lily Cafe

“This sequel to Payback’s a Witch is as much fun as the first, maybe even more so…The author develops an opposites attract romance that is fun and intriguing with curses and a compelling mystery to keep readers hooked.”—Duncan’s Books and More