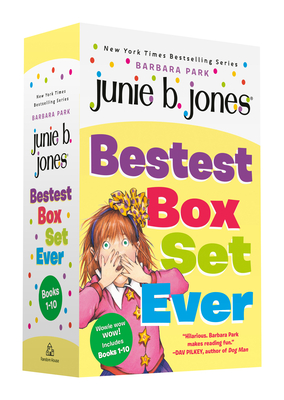 Wowie wow wow! Laugh yourself silly with the world's funniest kid in this special box set that includes the first TEN Junie B. Jones adventures!

Meet Junie B. Jones—the world's funniest kindergartener! With over 65 million books sold, the beloved New York Times bestselling Junie B. Jones series is a classroom favorite and has been keeping kids (and their grown-ups) laughing—and reading—for over 25 years!

Perfect for holiday, birthday, back to school, kindergarten graduation, and teacher gifts! And perfect for reading and laughing with together!

Barbara Park was best-known as the creator and author of the New York Times bestselling Junie B. Jones series, the stories of an outrageously funny kindergartener that have kept kids (and their grownups) laughing—and reading—for over two decades. The series was consistently a #1 New York Times bestseller, spending over 180 weeks on the list, and Barbara and her books were profiled in such national outlets as Time, Newsweek, USA Today, the New York Times, and Today.Barbara Park arrived at the writing profession through an indirect route. Before becoming a bestselling and beloved children’s author, she originally intended to teach high school history and political science. She got her secondary education degree but quickly realized that her calling was to be a writer. After several rejections, Alfred A. Knopf Books for Young Readers acquired her first manuscript, Operation: Dump the Chump and two others. Don’t Make Me Smile was published first in 1981, followed by Operation: Dump the Chump (1982) and Skinnybones (1982).  She went on to write over 50 books, from the picture book Ma! There’s Nothing to Do Here!, a love letter to her grandson, to middle grade novels such as Skinnybones, The Kid in the Red Jacket, Mick Harte Was Here, and The Graduation of Jake Moon. Barbara won more than 40 children’s book awards, including several Children’s Choice Awards. Barbara Park was born in Mount Holly, New Jersey, on April 21, 1947, and spent most of her adult life in Arizona. There she, with her husband, Richard, raised her two sons and spent time with her two young grandsons. Park died on November 15, 2013 after fighting ovarian cancer heroically for seven and a half years.

Denise Brunkus is a children’s book illustrator. She has illustrated more than 60 books, including the wildly popular Junie B. Jones series and Read All About It! by Laura and Jenna Bush.
Praise for Junie B. Jones

"Junie B. is the darling of the young-reader set." —USA Today

"Junie's swarms of young fans will continue to delight in her unique take on the world. . . . A hilarious, first-rate read-aloud." —Kirkus Reviews

"Junie B. Jones is a feisty six-year-old with an endearing penchant for honesty." —Time Magazine

"Park, one of the funniest writers around . . . brings her refreshing humor to the beginning chapter-book set." —Booklist