Get Together (Board book) 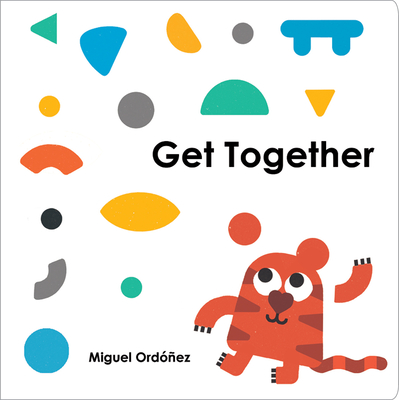 Get Together (Board book)


Usually Ships in 1-5 Days
The whole is definitely equal to more than its parts in this board book of shape-by-shape construction of animals by New York Times Bestselling illustrator Miguel Ordóñez!

A cast of animal characters are formed one by one, piece by piece in this visual play on the interaction between shapes. If just three simple shapes can combine to create a fish, then four shapes make a...? Young readers are invited to guess before turning the page to reveal the latest animal added to the pack. Part guessing game, part visual narrative, young readers will follow along as shapes are added to build new characters, and laugh along as the existing cast attempts to build something of their own. With humor, anticipation, and possibility on every page, this board book encourages creativity and proves that anything is possible when taken piece by piece.
Miguel Ordóñez has worked in publishing, advertising, and press with International Herald Tribune, European Space Agency, Elle Magazine, Hachette, Danone, Penguin Random House, and Macmillan. Two of his books with Macmillan have been New York Times bestsellers, and his illustrations for Jimmy Fallon´s YOUR BABY´S FIRST WORD WILL BE DADA have been honored by the Society of Illustrators. His third book with Jimmy Fallon, THIS IS BABY, was published in October 2019 and hit number one on the NYT picture book bestsellers list. Miguel lives in Madrid and works in his own studio, where he combines graphic design with illustration. He teaches Visual Communication and Creativity at Instituto Europeo di Design and Escuela Superior de Diseño of Madrid.
"Prediction, close observation, and ingenuity are all encouraged." -- School Library Journal