Fox on the Job (Step into Reading) (Paperback) 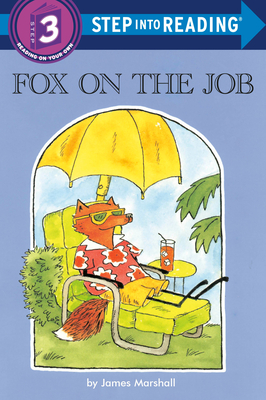 Fox on the Job (Step into Reading) (Paperback)


On Our Shelves Now
One of James Marshall's enduring classic characters--now available in Step into Reading, the premier leveled reader line!

When Fox breaks his bike, his mom tells him to get a job to pay for a new one. He tries working at a shoe store (too much!), an amusement park (too scary!), and even tries delivering pizzas (too fast!). Then he finds a job that's just his speed—bed testing in a store window! Zzzzzzz! James Marshall at his wacky best for early readers.

Step 3 Readers feature engaging characters in easy-to-follow plots about popular topics; for children who are ready to read on their own.
James Marshall was born in San Antonio, Texas, and grew up 16 miles outside of the town on the family farm. He graduated from Southern Connecticut State University with a degree in history and French. He is best known for his series on the mischievous exploits of Fox, a debonair, lazy showoff; the uproarious adventures of the two Cut-Ups, Spud and Joe; George and Martha; and the misadventures of the Stupid family. In 1989 he won a Caldecott Honor for Golidlocks and the Three Bears. He died in 1992.