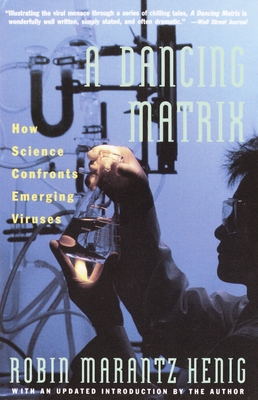 Even as humanity reels beneath the assault of AIDS, epidemiologists are gearing themselves up for the plague's successor. It might be dengue fever, whose carrier, the Asian tiger mosquito, has recently appeared in the United States, or Creutzfeldt-Jakob disease, which has been transmitted by contaminated human growth hormone. The next pandemic might be caused by any of a dozen viruses that were once confined to other species or territories but now place human beings at risk as we increasingly cross their boundaries.

Updated to include the latest research and developments, this fascinating and sometimes unsetting book sums up all that we currently know about viruses: what they are, how they spread, and how scientists are trying to outwit them. Interweaving theory and real-life medical drama, A Dancing Matrix is science reportage at its most suspenseful and informative.
Robin Marantz Henig is a medical journalist whose work appears in many national magazines, including The New York Times Magazine, Woman’s Day, Redbook, and Mademoiselle. Her first book, The Myth of Senility: Misconceptions About the Brain and Aging, won the 1982 Media Award of the American Psychological Association. Ms. Henig lives outside Washington, D.C., with her husband and family.
"Viruses have never gotten very good press... In Robin Marantz Henig, however, these tiny, protein-coated genes have found their fairest biographer to date."

"Provocative and intelligent...useful and highly readable."