Popol Vuh: The Definitive Edition Of The Mayan Book Of The Dawn Of Life And The Glories Of (Paperback) 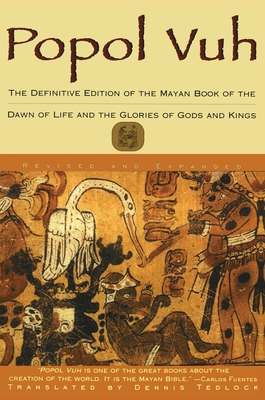 Popol Vuh: The Definitive Edition Of The Mayan Book Of The Dawn Of Life And The Glories Of (Paperback)


Backordered
Popol Vuh, the Quiché Mayan book of creation, is not only the most important text in the native languages of the Americas, it is also an extraordinary document of the human imagination. It begins with the deeds of Mayan gods in the darkness of a primeval sea and ends with the radiant splendor of the Mayan lords who founded the Quiché kingdom in the Guatemalan highlands. Originally written in Mayan hieroglyphs, it was transcribed into the Roman alphabet in the sixteenth century.
This new edition of Dennis Tedlock's unabridged, widely praised translation includes new notes and commentary, newly translated passages, newly deciphered hieroglyphs, and over forty new illustrations.
Dennis Tedlock is McNulty Professor of English and Research Professor of Anthropology at the State University of New York at Buffalo. He is the coeditor of American Anthropologist and the author of several books.
"Popol Vuh is one of the great books about the creation of the world. It is the Mayan Bible." –Carlos Fuentes

"The volume is required reading for everyone seriously interested in Native American literature or in Meso-American cultural history. Its publication is a major event."  –The Los Angeles Times

"Dennis Tedlock's splendid version...[is] the work of a brilliant anthropologist who is also a true 'poet of performance,' himself trained by a native Quiché master....Superb notes and glossary...An event of quite exceptional importance." –William Arrowsmith, Robert W. Woodruff Professor of Classics and Comparative Literature, Emory University

"Tedlock's translation is sensitive, precise, and illuminating. It will greatly help the Popol Vuh achieve its rightful place as a masterpiece of religious writing, familiar to all those who seek a message that transcends ordinary concerns." –Vine Deloria, Jr., author of Custer Died for Your Sins